Introducing Day in a California Court – a new online platform designed by De-Bug and populated by stories by local grassroots organizations across the state, data, and ongoing news coverage about county specific criminal justice systems. As California goes through major change in bail, Day in CA Court offers a window into what is happening in courts across the state everyday.

On behalf of organizers across the state, we are excited to announce the launch of the DayinCAcourt.org website — a running public diary of the California court system. Through a local lens and informed by grassroots organizers, the online platform serves as a window to track how counties across California are responding to changes in bail law. The site provides stories, videos, and data that monitor pretrial detention and release, as well as materials on how communities can observe and impact pretrial release decision-making.

In light of SB10 -- the recent legislation that threatens to give judges more power to detain people -- it is even more important to have both real-time observation and impact by local communities of their court systems. 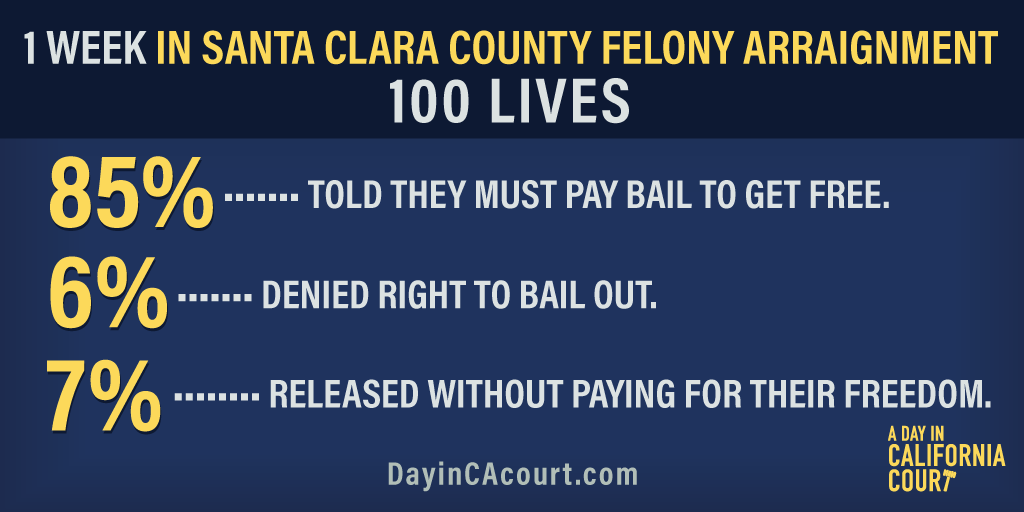 The local perspective of DayinCAcourt.org is a strategic response to changes in bail law in California. Our belief is that the power of any litigative win for statewide bail reform, such as the Humphrey appellate ruling, will ultimately only be made real by local communities holding local court actors accountable to the new standards. Similarly, any state legislative threat to freedom, such as SB10, can also be challenged and beat back by the flexing of community power expressed in the court machinery.

In fact, this site started as a show of community power -- a statewide rally in front of the courts. It began as coordinated actions held on February 20, 2018 under the banner “A Day in CA Court” involving 8 different counties from San Diego to San Francisco, led by grassroots community organizations who were part of the Participatory Defense Network. The actions were a community response to lift up the Humphrey decision - the groundbreaking appellate ruling that ended the practice of keeping people in jail pretrial simply because they couldn’t afford their freedom. Community organizations rallied in front of their county courts, handed out information to those waiting in line on how Humphrey could impact them or their incarcerated loved one, and then went into court to let judges and prosecutors know the community would be holding them to the Humphrey standard.

The organizations who participated in the actions went on to collectively plan how to have a more involved, sustained, and impactful presence in the court. We now have two complementary models of engagement: “Court Watching” and “Court Doing.” Court Watching is community organizations regularly monitoring arraignments and bail hearings, using standardized qualitative and quantitative data collection forms. They track bail decision outcomes, as well as actions by judges, prosecutors, and defenders. The updates and results of Court Watching is shared on Day in CA Court and on social media at #DayinCACourt. Community members can sign up for Court Watching on the site.

Court Doing is community organizations employing participatory defense tactics focused on the release and or detention decision. Community organizations, who are already trained participatory defense hubs, attend arraignments and work with families in attendance for their loved ones on how they can impact the bail decision. The effort of Court Doing is done in partnership with local public defenders, and has effectively countered the predictive assumptions made by risk assessment instruments and the overly-used reliance on detention.

We are very clear California is in a historic, pivotal, moment of change in regards to pretrial justice. How courts operate now will not only determine the trajectory of incarceration and release for the state moving forward, it no doubt will influence the direction of the rest of the country. This is why we created DayinCAcourt.org -- to offer a chronicling of the courts from the lens of community, and to highlight how communities are shaping this moment.

Please subscribe to DayinCACourt.org to receive updates, reports, and findings from the network, as we give a window into the California court system, and the movement holding that system accountable.