A Message to California: On a Quest for Democracy

On May 8, 2017, the organization All of Us or None and cosponsors brought hundreds of formerly incarcerated Californians and their families to the state capitol for a day of advocacy called Quest for Democracy. Together, they rallied, met with legislators, and advocated for honoring the rights of juveniles while in contact with police, reduction of lengthy prison sentences, and bail reform. 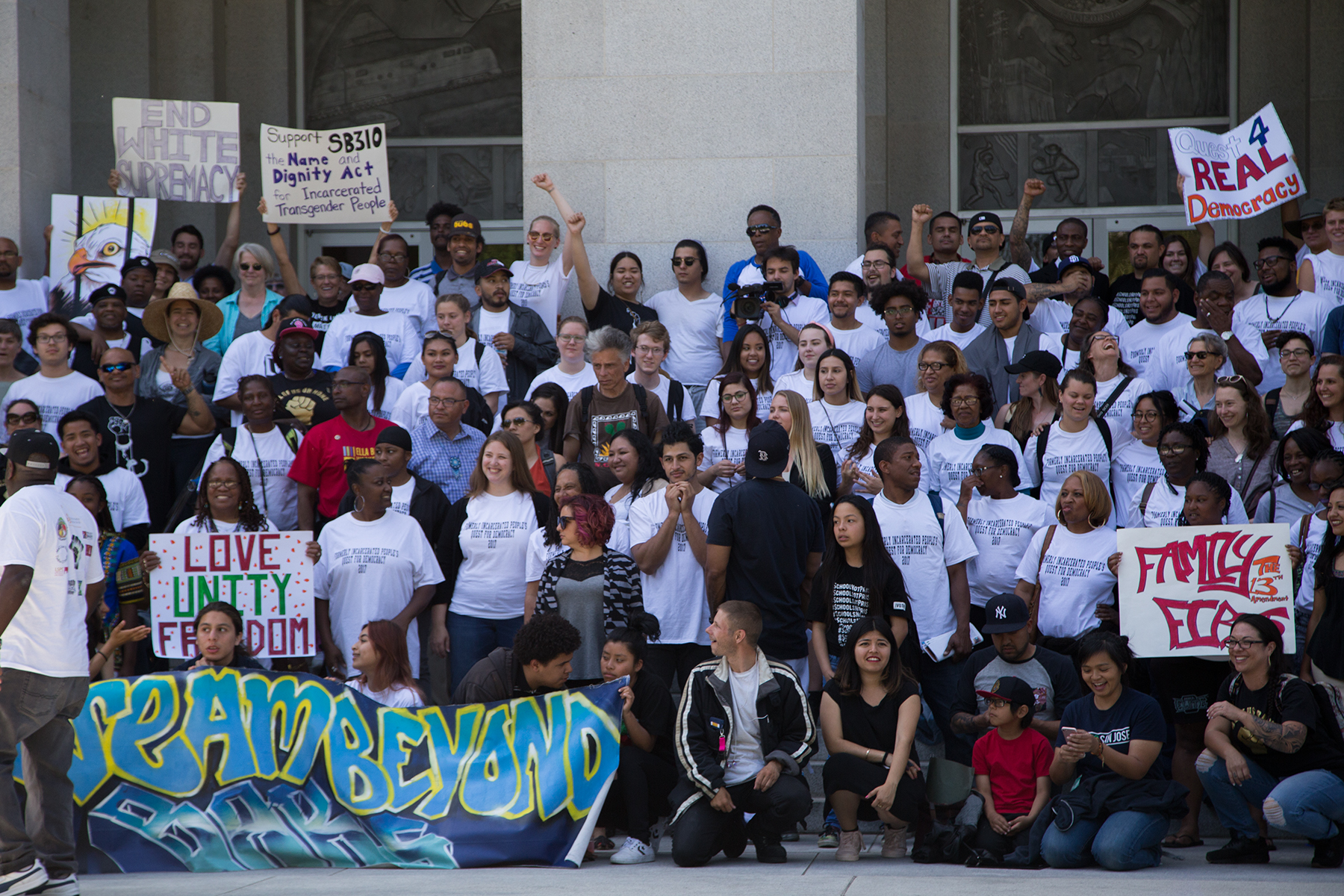 On an early May morning, All of Us Or None and Legal Services for Prisoners with Children packed buses from all over California with organizations such as Youth Justice Coalition, CURYJ, Homies Unidos, Young Women Freedom Center, Fathers and Families of San Joaquin, De-Bug and the list goes on. One thing all these organizations had in common was the personal burden that incarceration inflicts. We also know that we ourselves are the only ones capable of making the change necessary for equality. Every year since 2013, All of Us Or None gathers those affected by incarceration and trains them on policy and advocacy work, then practices what they’ve learned at the State Capitol. It is called Quest for Democracy Advocacy Day.

De-Bug boarded the bus leaving out of East Palo Alto, with many others from the South Bay. I always thought the 680 drive up was beautiful. But as I sat in the aisle row, staring at the road ahead me, it was as a different kind of beautiful that day. It was the feeling of knowing we were going up there this time on a special quest was truly gratifying.

Without even having to say a word, I knew who was part of the quest. Their energy exuded openness and understanding: a mix when put together that was very inviting and powerful. People from all backgrounds joined together for a greater cause.

Bills like the Miranda Rights Bill for Juveniles, where people under the age of 18 shall be given the opportunity get miranda protections when in contact with law enforcement, were advocated for. We also lobbied for bills like the Bail Reform Act, where for the first time in 20 years steps are being taken towards dismantling the oppressive system of money bail. It's goal is to provide alternatives to high priced bail requirements for those awaiting trial, and effectively utilize already existing programs such as pretrial services and community organizations.

These bills protect our rights. At one point during the rally we were told by the Capitol staff to keep it down, so we made sure to yell even louder. We were there for a purpose and that was to have our voices be heard. We were doing things a little differently. Lobbying was something completely brand new to a few, but knowing we had each other to fall back on, maintained our confidence.

We refuse to be judged by the color of the clothes we chose to wear, or the number of years we've spent in jail. We refuse to let our children be subjected to such discrimination, and refuse to be held captive any longer by the invisible chains of money bail. That day we stood together - united - demanding justice.

We got the chance to sit down with a few representatives from the assembly members, in hopes of enlightening the occurring issues that arise from ignoring such eminent topics that hit closer to home for many more people than we might think.

Our people deserve the right to be able to provide for their families just as much as any other ethnicity. Also we deserve to not be judged by our past. As a result, these families get torn apart. And our future children are whom endure the burden of our previous history. We must end this vicious cycle of oppression especially if the only reason is by monetary means. Money bail must be eliminated since it only exacerbates racial disparities of the system. There was a mutual understanding between all of us there that we had to be the leading state in all aspects, even if it meant learning a new language.

We sat together in the hot Sacramento sun, all as one and listened to touching testimonies, eloquently memorized poems, and heartfelt songs. That day demonstrated the importance of providing opportunities like pretrial services and options to systemic glitches that affect only certain demographic groups. They need to understand that our past doesn't determine our worth and that these bills will implant changes that will positively impact whole communities.

At the end of the day, everyone gathered in front of the Capitol and took a group picture. On the ride back I couldn't have felt any more proud be have been part of this years traditional Quest day. We were there on a quest to stand together, learn from one another, and demand to be treated equally as any other. Until next year, our quest continues.

Tags: all of us or none ,  legal services for prisoners with children ,  miranda rights bill for juveniles ,  quest for democracy