ICE Has to Go!

A Reflection From the Border Action Against the Separation of Families

As people across the country rise up against the separation of families at our borders, this writer relives his own separation and got a renewed sense of hope from attending a recent action calling for an end to ICE.

At the beginning of the month, I was blessed to be able to attend an action put on by the organization Mijente to abolish Immigration and Customs Enforcement agency and prevent Jeff Sessions from expanding Operations Streamline; the policy of conducting mass trials for migrants. The separation of families is hurtful on many levels – it puts me back to that night were my mother and I were detained and the fear that I felt. That’s why attending the action held in San Diego was transformative for me. The frustration and anger I had built up from the hopelessness of not being able to do much for those affected by the separation was lifted and substituted by hope and healing. Looking at the sea of people that made up the action I didn’t feel alone, the people showed up for change.

When I think about the children locked up and separated from their family, not knowing what is to come, it puts me right back into the moments of fear I remember from my childhood. Not knowing if your mom will come home from work that day, fearing that she was detained and deported. The understanding that you are seen as less than human for the simple fact that you have no legal documentation, the uncertainty of what the future holds for you and your family. 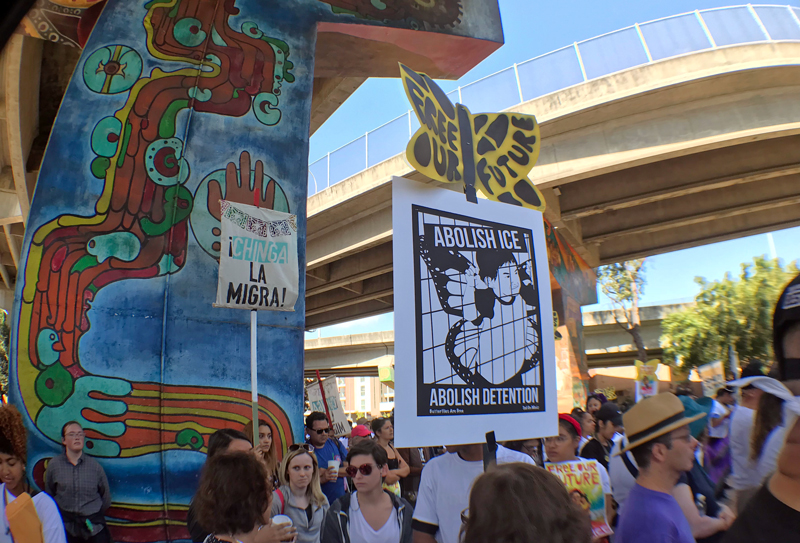 I think back to the night when my mother and I were detained. Twenty-eight years ago as a five-year old, my mother and I crossed the U.S./Mexico Border, where border patrol agents detained us in the middle of the night. The scene was catatonic and frightening for adults, let alone a five-year-old child. Bodies were being snatched left and right, put into vans and taken to a detention/processing center. For five terrifying minutes my mother and I got separated in the mist of all the confusion. I was in the holding cell, cold and unsure of what was to come next. It was only five minutes and it was unintentional, yet those five minutes left an impact in my life. Growing up there were times where I felt alone, and insecure of my safety. I felt signs of PTSD that I still deal with as an adult. I had a lot of fear of losing my mother, of waking up one day and not having her by my side. This was difficult for me to let go of because growing up in the 1990’s in the Pete Wilson era you had a constant reminder that undocumented immigrants where not wanted in the U.S. and that you would be sent back over the border. I had no idea when that could happen to us. 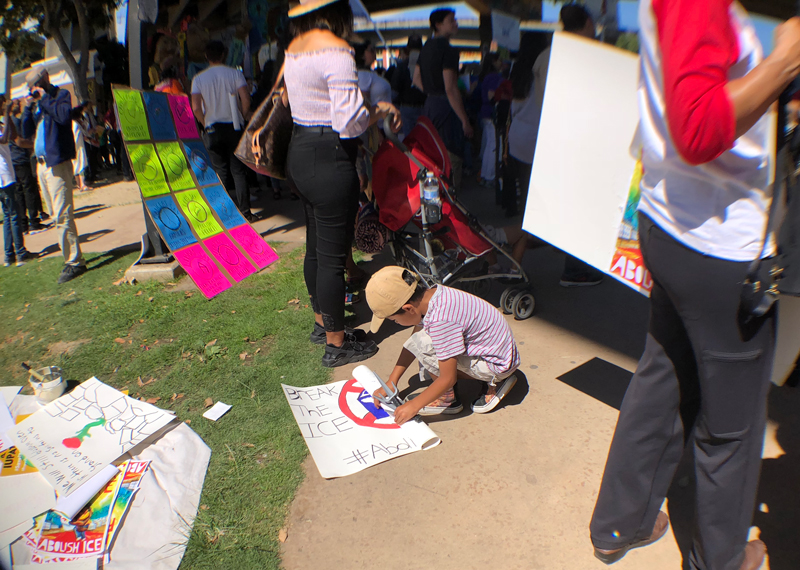 Being able to drive down from Northern California to San Diego and connect with hundreds of like-minded people who traveled from Arizona, Oregon, Washington and all parts of California to #abloishice and fight the separation of families was powerful.

The day started with hundreds of people gathering at Chicano Park, a historically colorful location in San Diego. The beauty at first sight was the diversity found in the group. From young to old, to all shade of skin colors and communities. There were babies just a few month’s old in support with their parents. In a kids art area the little ones got ready for the march by dressing up as humming birds. With makeshift bird heads and shinning silver wings, these small activists made a big statement. You can’t hold back a bird from roaming free, nor will you hold us back. 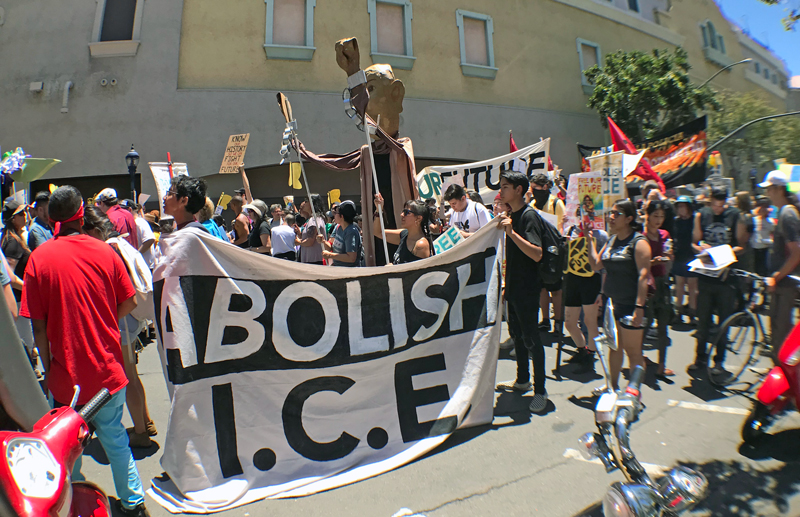 The youth were at the front of the march and kicked it off by singing “De Colores,” a movement song. A song that I sang as a young child in school, at a time where my identity as an undocumented immigrant was being formed, rang so loud and was a befitting way to start the march. Hearing their small voices projected so loud almost brought me to tears.

People held hand made signs, banners, puppets and altars with messages that called for the abolishment of ICE, and to keep families together and not in cages. There was chants, music, drumming the provide the soundtrack for the action. The energy level was high for the 2.5 mile march to the ICE field offices where protesters peacefully blocked the entrance to the building and delayed trial sessions.

I marched for my family, my mother who was so brave to leave all that she knew in her world and move her life to a place where she was already seen as an underdog. I marched for all of those who also made a brave choice to come to this country in search of better lives. I asked my mom in recent times if she thinks us moving here was the best move for us. “Of course mijo, take a look at your life and you answer me that question,” she says to me.

Attending the march made me hopeful for a future without ICE; the energy and outrage opposing ICE practices is strong in the public, and now more than ever the people will not stand for unjust immigration polices, which includes the separation of families, deportation of individuals seeking a better future. The people all over the country are waking up more and more, and their voice is being heard and felt, ICE has to go!

Related Media:
Splitting Up Kids from Their Parents Is Nothing New In This Country
We Will Not Be Scared Into Silence By ICE Or the Trump Administration
High School Students Across San José Walkout For A #CleanDreamAct

Adrian "AD" Avila is a visual artist at De-Bug who uses design and media to tell the stories of his community.