Editors Note: To the author’s surprise, the bail bond industry selected a controversial reality television personality — Dog the Bounty Hunter — to be their spokesperson to challenge the Cali-fornia Bail Reform Act. The bill, co-sponsored by civil rights organizations, family advocates, and public defenders will make it so people are not held in jail simply because they cannot afford high bail amounts. To follow the bill go to: bailreformca.org

Last month, I drove to Sacramento from San Jose to join families, national criminal justice experts, and civil rights advocates to call on legislators to pass AB 42 - The California Bail Reform Act of 2017. In passing this bill, we will dramatically cut down the number of people who have not been convicted of a crime and are in jail just because they could not afford the high bail amount.

But we weren’t the only people packing the committee chambers — bail bonds representatives and lobbyists also decided to show up. In the Capitol building as I turned the corner to the hall in leading down to the hearing room, I was rushed by a herd of bail bonds agents. They all hurried to fill all the seats in the small audience space, leaving no room for anyone else. They were lead by the most infamous bail bondsman in the nation —Duane “Dog the Bounty Hunter” Chapman. 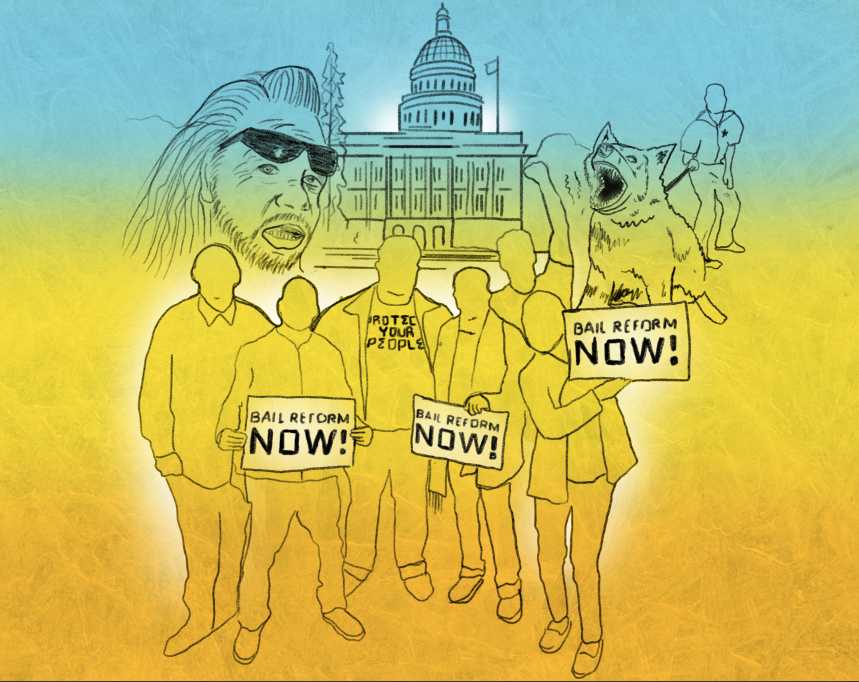 I couldn't believe the warm welcoming Dog received. People, including legislators, were star-struck. I wasn't too sure what to make of it at first; I thought it was a joke. But then, as Mr. Dog continued to testify to the assembly members on behalf of the bail industry lobby, all I kept thinking was how they couldn't have gotten a better representative to demonstrate what an inhumane business the bail industry is.

I remember watching him on TV when I was younger. My brother and I would just stare at the screen and think what an overbearing bigot he was. And we weren’t the only ones who saw his racism. Dog didn’t leave reality TV to pursue a career as a lobbyist; his show got pulled off the air. He was recorded repeatedly using the n-word in a wide-ranging racist tirade. Hearing his rant, it’s difficult to have any respect for him, or think that he is somehow looking out for California’s diverse population as he defends the bail industry at the state capitol.

I knew back then even as a child watching him manhandle people on the show, that what he was doing was wrong. Today is no different. We know that Dog’s sole purpose is to distract us from the bigger picture here, which is that bail is unethical and bias. Statistics show that black men pay 35% more in bail amounts than white men do, and Latino men pay 19% more in bail than white men.

In his testimony to the Assembly, Dog admitted that the justice system is flawed, but said, “Bail Reform is not the answer.” Listening to him, I wanted to ask Dog about the disparities amongst bail costs for people of color. And I wondered what he has to say about the over 62% of jail beds in California filled with inmates awaiting trial, who have yet to be found guilty of any alleged crime?

The halls of the Capitol were filled with sponsors and supporters of the bill as well. Yellow highlighted “Bail Reform Now” signs floated about. Inside the committee room, there were people testifying who could speak personally about why we need statewide bail reform. Ato Walker, a San Jose resident and a member of Silicon Valley De-Bug, told his story of his family having to pay $8,000 to a bail company -- money that is not recoverable -- even though the charges against him were eventually dropped. Walker even called out Dog by name, as he laid out the urgent need for change. He told the Assembly members, “We need to stop punishing poor people and their families with money bail, contributing to the deeper criminalization of marginalized groups.” Aaron Johnson, the supervisor of Pretrial Services in Santa Clara County, also spoke on behalf of the bill. He described how pretrial services is a practical and effective alternative to money bail.

And we all knew why the bail lobby decided to bring in a reality tv personality to represent their industry. Dog the Bounty Hunter was there to distract people from a policy that can change how defendants are treated in a broken justice system. Because in the current broken system, defendants are seen only as potential profits to bail industries. And while bail companies get rich, taxpayers are the ones left paying for those who are detained simply because they could not afford bail. The average cost to house someone in a California jail is $114 a day.

And when people are stuck in jail because they can not afford bail — they often plead guilty, whether they did the alleged act or not. Nationally, 98% of felony charges are disposed before even reaching trial, according to the Court Statistics Report, meaning that “day in court” that we often see in court shows and movies is practically non-existent.

After the hearing, Dog posed for a picture with four white horses in front of the state capitol. For him, the visit boiled down to photo opportunities -- while for the families who took off work to attend, this day was about the future of their communities.