Coping With An Incarcerated Loved One

After seeing the film Life After Life that follows three men as they return home from San Quentin, Yerba Buena High School student Marissa was inspired to write about her own life growing up with an incarcerated loved one.

A lot of people believe that if you are in jail or have been to jail, you’re a criminal; this sticks with you your whole life. Most of the time people don't want to hurt, rob, or whatever the case may be, but they do it because of the circumstances they have been put in.

After watching the 2018 film Life After Life directed by Tamara Perkins a lot of emotions ran through me. I imagined what it would be like to spend all that time in jail, and I also thought about my dad, who is currently incarcerated.

According to The Sentencing Project, a group that works towards stopping unfair treatment in our U.S prison system and finding alternatives to incarceration, there is a lot of jarring research about our U.S. prison population. There are currently over 2.2 million people in U.S. jails or prisons, and for the last four decades there has been a 500% rise in the number of incarcerated people. Additionally, more than 60% of the U.S. prison and jail population are people of color, with black men being six times more likely to be incarcerated than white men. And many ex-prisoners often return back within a few years. This is a real problem.

In Life After Life, we take a look at the lives of three ex-prisoners: Chris, Harrison, and Nohel. We see how they turn their lives around after spending years in prison for things like murder and armed robbery. This film is a great example of people being able to better themselves.

A character in this film that caught my attention most was Nohel. He actually approached me during the film screening at my school, and we had a short but sweet conversation. Nohel was able to make a complete 180 change after spending thirty plus years in prison; he ended up getting married, having children, living in a house, and driving his own car. Hearing about Nohel change his life, I couldn't help but think about my dad.

I think Nohel was the character that related to my dad the most, except my dad hasn't been able to change as drastically. He wants to change, but his mental health struggles make it difficult for him to grow.

He and my mother met when they were about 20 years old at my mother's work. At first their relationship was good. At the time, my dad had a lot of money from getting into a bad car accident. So they had a lot of fun together, from parties and drugs to fancy restaurants and hotels.

They were together for about a year and a half, and within that time, I was conceived. Shortly after I was conceived, my mom started noticing a difference in his behavior. She said, “Throughout the years he just got worse and worse. He did whatever drugs he could get his hands on, and his mind got lost.” Before they met, my father had already spent seven years in jail, so he was still trying to adjust to life on the outside.

Eventually, they broke up. My dad returned to jail when I was around one year old, and he has been in and out ever since.

Like me, there are many families and children struggling with not having their loved ones around, whether they're in jail or just not in their children's life. The impact on families can be heartbreaking. My grandpa (my dad's dad) says, “The first time he went to jail I didn't know what to do because this never happened to me before. I was new to the parenting thing, and I was still young. All I could do was try to help; I was very disappointed and heartbroken, and I felt like I failed as a parent.”

Once in third grade, I remember having to write a letter to my parents, and our teacher wanted us to put "dear mom and dad." I remember asking her, “well what if you don't have a dad?” The teacher responded with something like, "We all have moms and dads." Afterwards, I felt weird and confused because she made me write "dear mom and dad," but I knew he wasn't going to receive the letter. While for other kids it was normal to write "dear mom and dad" in their letters, for me it didn't feel right because from a young age my normal was not having a dad. What was normal for me was to think of my mom as my only parent.

I’m not sure what I missed out on by not having a dad. How can I miss what was never there? But if he was around, I’d imagine my life would be better. I probably wouldn't be struggling with money, I’d probably be able to go to him for advice, and I’d probably just be a happier person overall. But things don’t always turn out how you want. 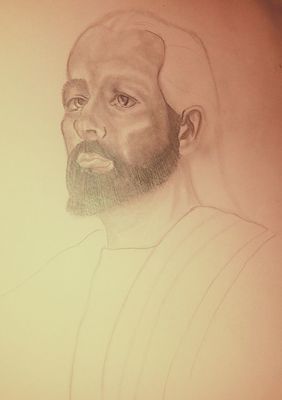 Even though I've missed out on having him in my life, something that does keep us connected is art. Every month I receive ten or so drawings, usually of celebrities. I love art, and so I'm always interested in seeing his drawings. One of my favorites is a portrait of Jesus because it's the nicest one he's done, and he asked me to finish it.Not having a family member around hurts. It sucks. You wish they could be there, but they won’t always be able to, and that's ok. In a way, it makes you stronger. I miss my dad and I'd love to have him in my life, but even though he's not here, I'm getting through life as best I can. I know how it feels not having a parent around. If I ever decide to have children of my own, I know I'll try to be the best parent for them.

The Warrior Times is Yerba Buena High School's student-run news publication that creates stories by the youth, for the youth. The young people write passionately about issues occurring in their lives, communities, and the world. Together, they are working toward elevating collective consciousness, compassion, and commitment to justice.

Related Media:
Breaking Out of Society's Expectations
Fighting Back With Our Hearts and Minds
Women Survivor: Getting Through Domestic Abuse