Displacing the Unprofitable and Undesirable in San Jose’s Fountain Alley

A critical lens on the policing of Fountain Alley and by extension downtown San Jose, which targets the very people who need the most help and protection.

The San Jose Police Department has opened a satellite station in a vacant office space in Fountain Alley, a corridor between 1st and 2nd Streets just south of Santa Clara Street in Downtown San Jose. For years the location has been a police surveillance “hot spot” due to perceptions that out-of-town dealers arrive on nearby public transit to sell drugs. Citing more than 60 calls for police service in the area in the past 30 days alone, newscaster Damian Trujillo on an NBC video states, “Police are moving in, right here, for good,” and later, “if the crooks want to hang out in Fountain Alley, they’re going to have to hang out with the cops.” Though the officer he interviews says there’s a need for a more visible physical police presence in the alley, the satellite station will not be marked with logos or signs. Instead, officers will hide out in a fake storefront. In the window: a gold mannequin in a flapper outfit, an old-timey jukebox, ornate lamps, and other vintage wares; The effort is funded by the San Jose Police Foundation, whose board includes Silicon Valley financiers, downtown business owners, investors, etc. They want a “throwback vibe.”

The impulse to surveil this area in this manner brings up a question of San Jose’s decision-makers: who is being protected and for what motives? The individuals the police presence targets are predominantly Black and Brown folks, many of whom are homeless or poor. Some are caught up in alleged drug violence or sex work, which are not acknowledged as a symptom of larger issues – of poverty, a lack of housing, of mental illness among others – in our community, but as the problem itself. In our minds, the very people targeted are the ones who need the most assistance and protection.

The city is increasing state and systemic violence in downtown while simultaneously sweeping the unprofitable under the rug. First, the city shuttered the spaces like The Jungle where people sought shelter. Housing costs continued to skyrocket, despite reports that more than 4,000 unhoused people reside in San Jose. Groups like the San Jose Downtown Association and the Knight Foundation began funding and promoting events to “activate” Fountain Alley and St. James Park; two public locations where individuals gather due to their proximity to public transportation and social services. Event planners cloak these functions in the promise of “good clean fun” — think lightsaber battles, roller skate meet ups, hula hoop jam sessions, and movie nights. However, these events have a second, more insidious purpose: to displace the “undesirable” people who gather there. On April Fool’s Day of 2016, one of us posted the following question on the wall of a Facebook event called Fountain Alley Fun Day: can you say more about why this space needs to be “positively activated?” An anonymous event planner responded immediately with a link to the following Foursquare review: 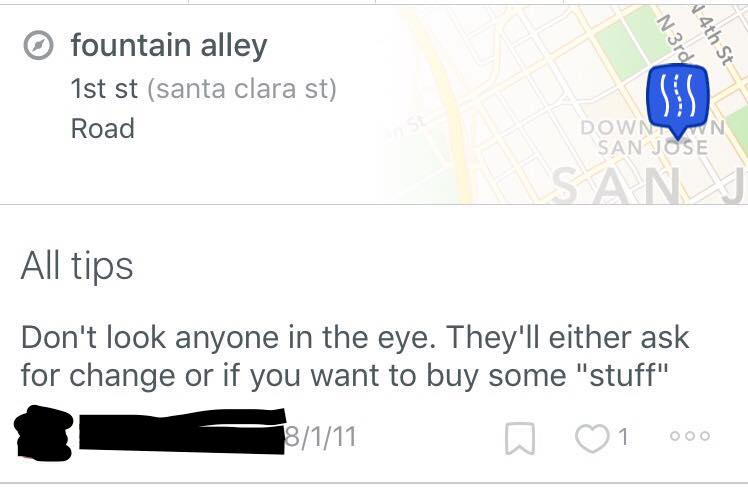 In past eras, San Jose was an epicenter for resistance, compared to Berkeley for local organizers’ capacity to stand up for civil and human rights. Today, San Jose’s decision-makers are selling our space to investors and systemically displacing any demographics that don't fit the mold of Future San Jose. We are tired of holding back our assumptions that the consensus of San Jose’s decision-makers is that they want the poor and/or people of color to either die out or disappear. Since the attempts to “activate” these spaces have failed, apparently they have to resort to a different, more f*cked up form of "tactical urbanism." That is, escalate old-fashioned state violence with an undercover police department sitting right in the center of Future San Jose.

If the Lido nightclub closes down, what's left of our hope for a truly culturally rich San Jose? Recently unveiled plans to “re envision” St. James Park are just a bullet point on a long list of “upgrades” to the City which in NO way actually treats our community’s problems like mental health services, housing, and drug use in and around downtown. In a Mercury News article, Scott Knies, the Executive Director or the San Jose Downtown Association (SJDA) says: “It’s taking a place that’s underutilized right now and making it attractive to people.” All it takes is a walk through St. James Park to see that the space is indeed constantly utilized by San Jose residents, but not by the kinds of yuppie consumers that developers and business owners hope to attract. In a brochure listing a trio of “brick-and-timber” storefronts in Fountain Alley as investment offerings, Colliers International describes the location as surrounded by [a] Tech Mecca, one that is home to consumers earning the highest wages in the country. It is not hard to see where people in power’s interest and allegiances lie.

Homelessness does not disappear by taking away public restrooms and places for people to sit. Visible signs of years of systemic oppression cannot be blotted out with flowery marketing copy. The need for a drug trade cannot be stopped by incarcerating more people and ignoring the underlying health and societal issues that make humans turn to drugs in the first place. You cannot support your people by policing them more. San Jose residents are struggling and they need resources not walls!

Every time something new like this comes along to displace a marginalized community in San Jose, it isn't on a whim. There are committees planning behind closed doors, or strategically mapping every new move with only statistics and money in mind. They know how to deflect and bank on the apathy or forgetfulness of the struggling few.

Consider the Thomas Fallon statue, a 6,000lbs about $1.3M monument commissioned by the City of San Jose in 1988. Thomas Fallon was the self-appointed captain who claimed San Jose for the United States in 1846 by raising a flag here. The Pueblo Unido de San Jose, a coalition of 19 community groups, formed to oppose the City’s statue, stating on a flier that it “commemorated a time when Mexican-Americans began to occupy a place on a lower rung of society.” Through the group’s perseverance and activism, the statue collected dust in an Oakland warehouse for 12 years. Today it stands, uncontested, on Julian Street, while a new wave of San Jose residents remains unaware of its history. Last year, the City used $100,000 of state grant money to move the statue 90 feet because it was in the way of a new development project.

What do you think? Is the time right for new coalitions to form? How can we build empathy and spark action in our community to protect the marginalized folks most at risk? 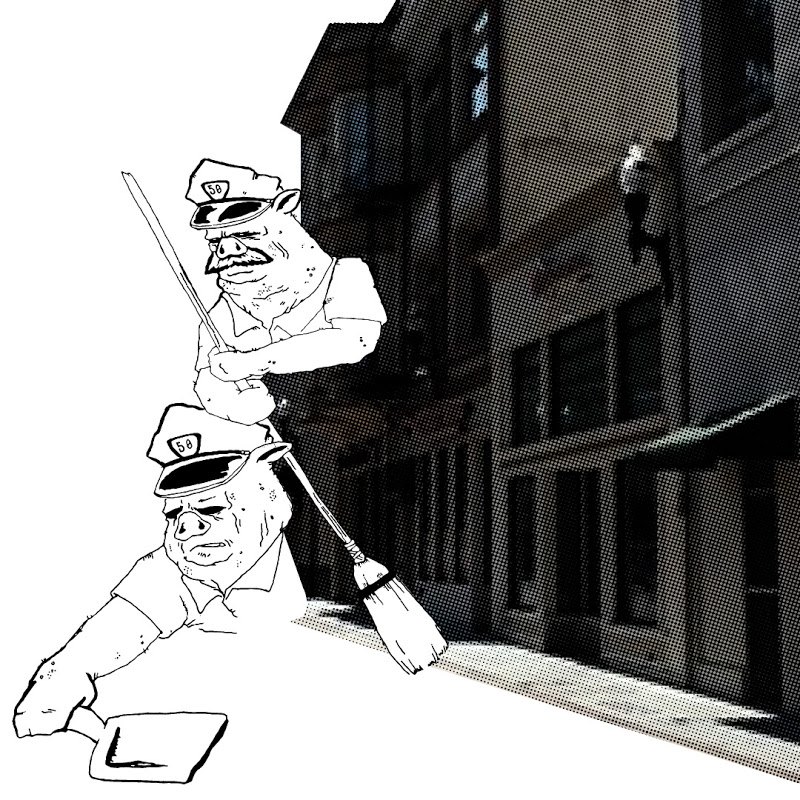 “The great desire of social and political domination is for us to believe that when someone is marginalized, they are too entangled with oppression to have moments of sociopolitical clarity: The marginalized person cannot see past their struggle far enough to articulate their own pain, let alone articulate solutions that may produce relief or revolutionary action. I am stuck at the end of the day, washing blood and mud from my skin in warm water in the hope that I will miraculously make a lotus flower bloom," Myles Johnson.