A week after Montgomery County, PA commissioners fired Dean Beer, the Chief Public Defender, and Keisha Hudson, the Deputy Chief — over 200 people filled the courtroom steps demanding their reinstatement. The rally, full of chanting and fiery speeches, was a precursor of hours of powerful public comment at the commissioners meeting condemning the firings as an affront to justice.

For sure, these commissioners had never seen anything like this, and had no idea what an outpouring of outrage and solidarity their actions would unleash.

What was so striking about the imagery of the rally was seeing public defenders and community leaders collectively filling the entire stairwell to the courthouse entrance. On any other given day, those exact stairs were the pathway to an institution that caged people due to race and money — literal steps to family separation, the violation of rights, the stripping of freedom of mainly black and brown Montgomery County community members. On any other given day, for community members, and I suspect public defenders, who walk up those stairs were anxiety-ridden, lonely, and filled with a knowing that whatever happens once through time doors will not be justice — despite whatever slogans may decorate the walls. 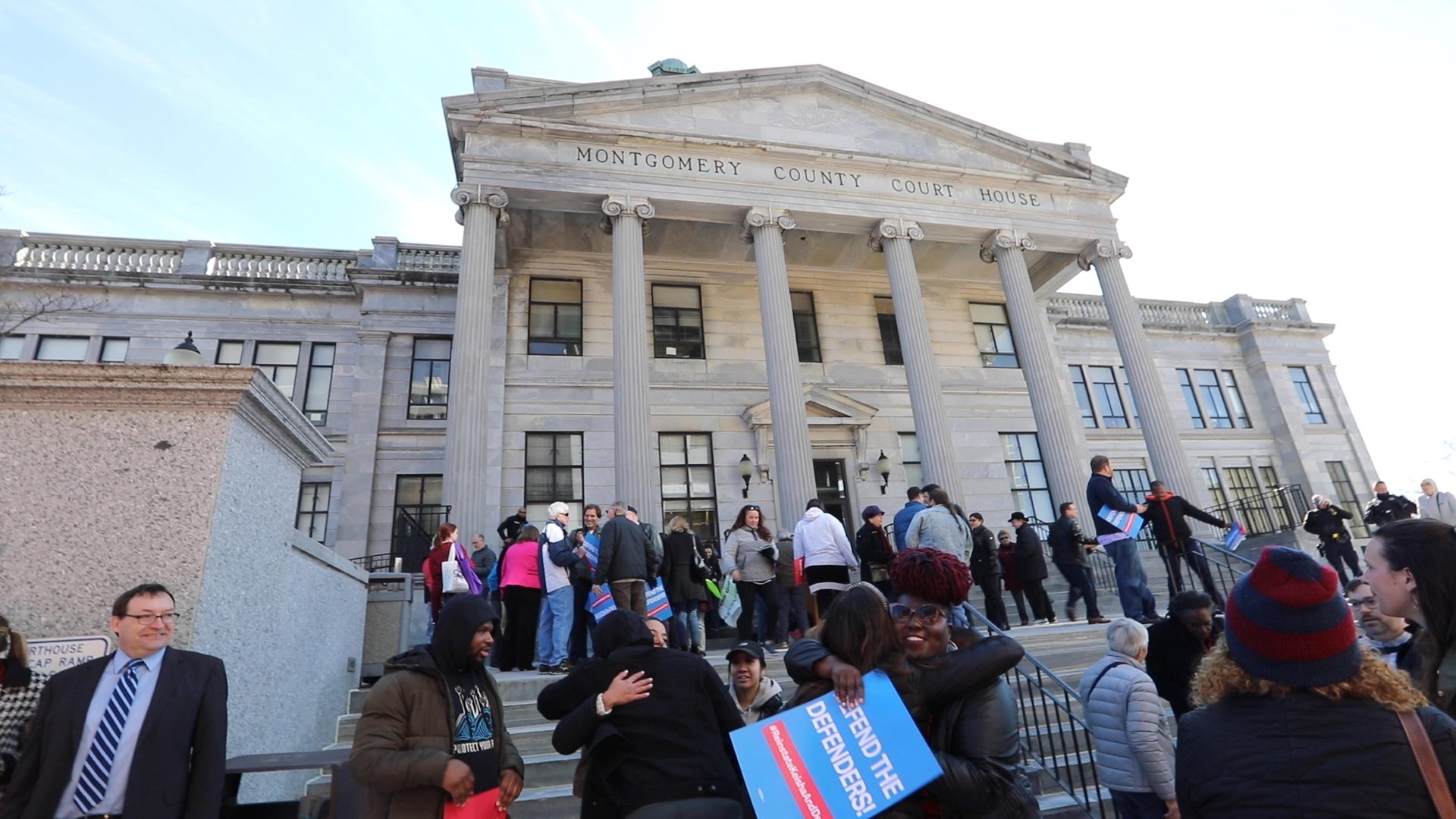 (Rally organized by the ACLU to reinstate Dean Beer and Keisha Hudson.)

That is why the response to Dean and Keisha’s firing is such an inspiring window into the galvanizing power of community members and public defenders uniting to fight together for the common cause of freedom. Keisha and Dean were terminated shortly after filing an amicus brief exposing repeated stories of people being held pretrial in Montgomery County because they couldn’t afford bail.

For the most part, across the country, communities organizing locally for justice and public defenders advocating for their clients and policy changes happen in parallel, disconnected, streams. The end goal of what both are fighting for may be the same, but they rarely leverage each other to get there, or work together to overcome the shared obstacles such as DA offices, other law enforcement, and reactionary laws and lawmakers that get in the way.

So while the packed rally and commissioners’ meeting was a testament to Dean and Keisha as public defenders, it was also a representation of what they have built with the community in Montgomery County. They, together, have become the bridge — and their collective force was undeniable at the action.

The truth is, in many places if word got out that the two top public defenders in the county were fired, there would be little to no reaction from community leaders. But the community in Montgomery County had spent years building with the public defender’s office through Dean and Keisha’s leadership. For example, Montgomery County was one of the first jurisdictions in the country to launch a participatory defense hub — an organizing model for families of loved ones facing charges to impact the outcome of cases of their loved ones. As a result, community members saw what was possible — case by case — when community and defenders come together to fight wrongful charges and sentencing. And from a movement sensibility, building with public defenders to fight for freedom allowed for organizing work that challenged the larger systems of institutional racism, but was proximate and immediate. As close and as real as whether or not a loved one is home or locked up.

And in this alliance, defenders got to tap into the power and community to change the atmosphere and culture of the courts. For defenders, it was no longer just attorney and client versus the state — the community was there with them.

This is why participatory defense organizers from neighboring jurisdictions in Philadelphia, as well as participatory defense hubs from across the nation such as from Tennessee and California came to join the rally and testify at the commissioners meeting to demand the reinstatement of Keisha and Dean. They came to protect the movement and path forward that Dean, Keisha, and the community collectively represent for the entire country.

What was revealed from the letter of Montgomery County Chief Operating Officer Lee Soltysiak explaining his position against Dean and Keisha was that they were fired for the same exact reasons they were trusted and lifted up as partners by the community they serve (and by the way, the residents the commissioners represent). They were terminated for fighting for bail reform, police accountability, and the rights of families to not be price gouged while talking to their incarcerated youth. These issues are the embodiment of precisely what the fight for racial justice from a community perspective looks like, and what defenders bear witness to everyday in court.

In this way, what the Montgomery County public defender’s office did was exactly what communities need to give shape and calibrate their campaigns — share information from the inside of machinery of the courts that lift up individualized examples of injustice, as well as systemic patterns that are routinely observed by line public defenders.

No doubt, if Keisha and Dean were not the type of inspiring, community focused, justice driven leaders they are, there would have been no rally. This would have been an insular struggle within the domain of public defender email list serves.

But communities of color rightfully saw the firing of Keisha and Dean as a direct attack on them, and a tactic to preserve a status quo that had made institutional racism the accepted court norm. That clarity of vision came from what has, and is, being built and role modeled in Montgomery County.

So while the crisis and growing movement in Montgomery County is about public defenders, it is also more importantly about what public defenders, when at their best, fight for — freedom and justice for the communities they serve.