Money Bail Cost Me My Job, Apartment, and Stopped My Life

CA State Senator Hertzberg and Assembly member Bonta have introduced the California Bail Reform Act, that if passed, would practically eliminate the use of money bail. And with over 60% of those detained in jails there simply because they can not afford bail, the act would dramatically reduce the jail population. For one De-Bug contributor, the practice of money bail essentially cost more than a dollar amount. 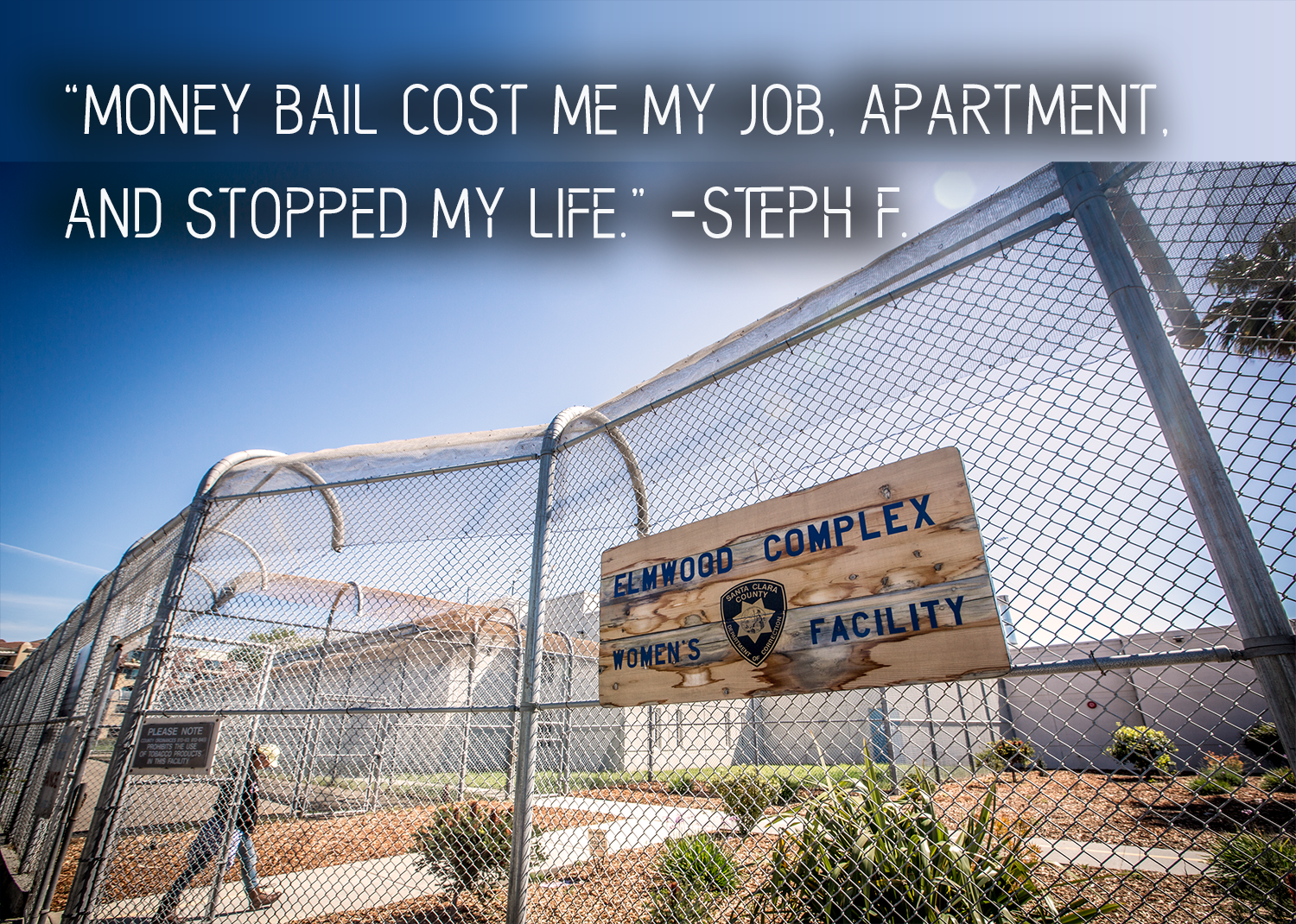 I am 30 years old and have never been in trouble with the law until this year. Actually, I never would imagined this, but I spent my 30th birthday in the Elmwood Correctional Facility Jail in Milpitas, California.

If I was not forced to sit in jail for almost three weeks, I wouldn’t feel like my life is falling apart. I am an after-school recreational leader, and every single day I would wake up with my kids on my mind. I thought of all my friends and family that I left so abruptly. No one knew where I was. I lost my apartment for not being able to pay my rent. All of my food had gone to waste.. My car got impounded and now I am in debt for a car that is not even worth a third of what they are charging me for to get it out. To be honest, this whole experience seems like a nightmare I just can’t wake up from.

See, for people like me, it is already difficult enough to stay afloat in Silicon Valley. I am a Latina who grew up impoverished. Yet those limitations in life only fueled me with drive to strive for better. I lived my life to the fullest, making the best out of every situation. I remember the day I received my AA in Social and Behavioral Sciences at West Valley. I walked out of the office with the certificate in my hand, thinking, “This is it! I have completed the highest level of education that I can.” That was until the California Dream Act passed in 2013. Then, DACA was initiated and the rest was history. For once, I felt hope for prosperity.

Immediately I enrolled at San Francisco State, and at 27 years old, I was able to experience something many take for granted. I was the first in my family to do such a daring thing. The first year, I would commute Monday through Thursday all the way to San Francisco on transit; Thursday nights, and all of Friday, Saturday, and Sunday I worked at Starbucks. All the while, still upholding my obligations at home.

Despite all the obstacles, I have graduated with a BA in Communication Studies in 2016. I had gotten my dream job as an after-school recreational leader, and for the first time ever I felt like my life was perfectly falling into place.

That was until I got arrested in January this year. I was slapped with, not one, but two, felony charges unjustly. They set my bail at $100,000; an amount I knew I was never able to afford. So, I sat in jail for almost three weeks, just thinking of my children at work. I knew they needed me just as much as I needed them. I would wake up in cold sweats thinking of how much money I would have to pay to the tow company that impounded my car. Also, I lamented the idea of having to move back with my parents because of the debt I would be in.

Everything I have been working towards has been put in jeopardy by this experience. And I know that I am not the only one.

I couldn’t believe how many women in Elmwood were held captive simply because of bail-money. Dominguez, a woman I met in there, stressed about her four young children and how her elderly mother could barely maintain herself, let alone care for her babies. Lil’ B slept right next to me, and explained how she got her first DUI. She was 24, from Gilroy, and bail wasn’t even an option. Even Mr. T, my landscape teacher said I wasn't supposed to be there.

If only I was able to report to my job in time, I wouldn’t feel like my life is going in a downward spiral. As a result of not being able to afford bail, I lost my job, lost my apartment, and am even in debt. I shouldn’t have to lose it all because of insufficient funds. 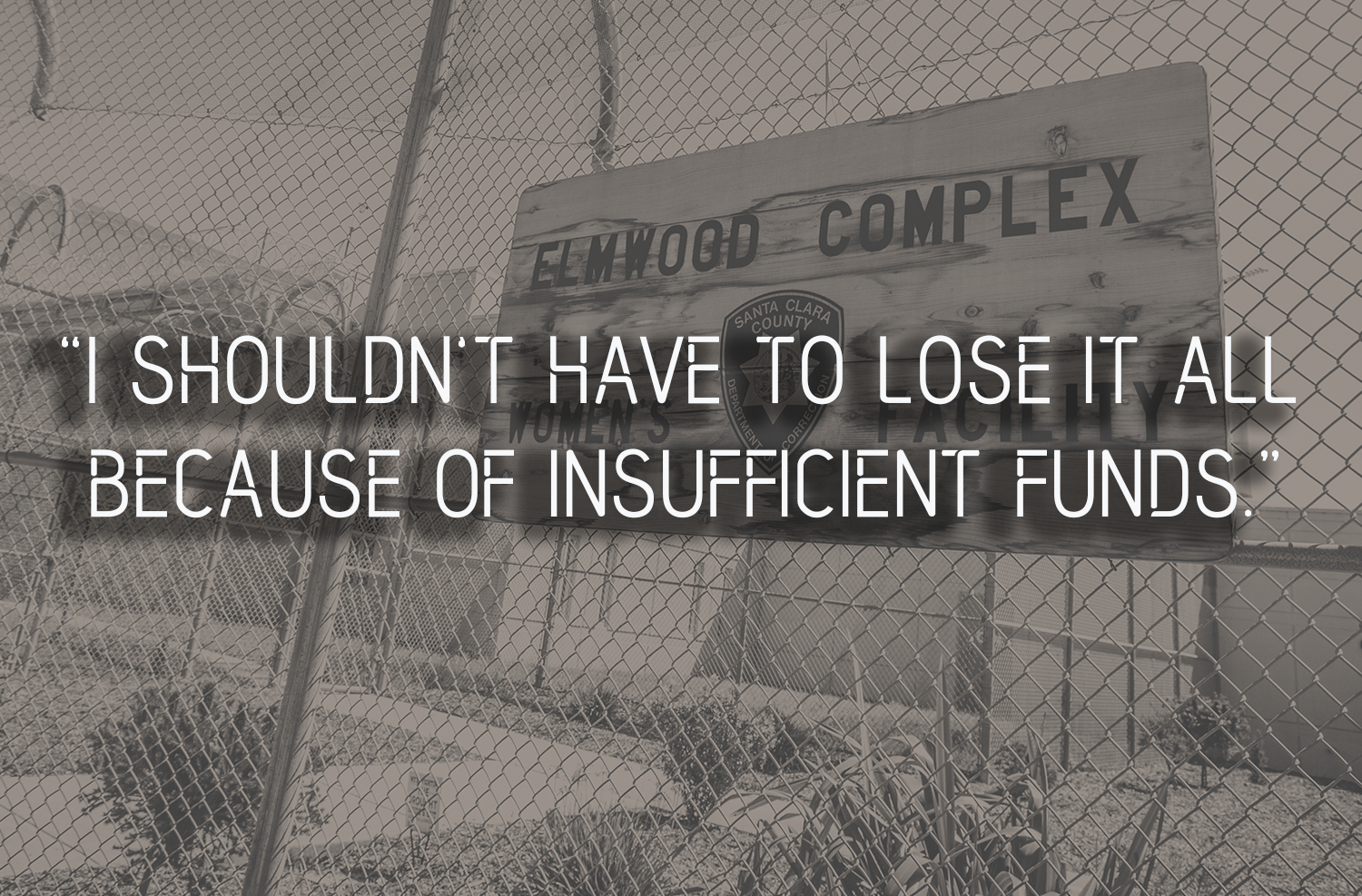 Eventually, I was granted release under pretrial supervision. If I would have been released earlier, perhaps the significant losses I endured wouldn’t have been so great. I am grateful for our Santa Clara County Pretrial Office, and wish more people across the state had the same opportunities. I am now able to piece my life together. Bail, put a dollar sign value on when I would leave jail. For myself, things crumbled while I was in jail and I was lucky to have had been released before life crumbled even more. Unfortunately, like "Dominguez" and her four young children who await for her release, money bail is what can either make and break her family, and that shouldn't be the case.