After a year of suspending a hunger strike, Prisoners United inside Santa Clara County Jails will restart their peaceful protest to demand humane treatment in the jails.

It has been one year since October 22, 2016, when our hunger strike and peaceful protest was suspended to show a good faith effort and allow time to end cruel and unusual punishment of Solitary Confinement/Ad-Seg and meaningless classification reviews in Santa Clara County Jails.

Although some changes have been made, we PRISONERS UNITED continue to be subjected to arbitrary policies and practices which deny the spirit of intent. PRISONERS UNITED will lift the suspension of the hunger strike beginning October 22, 2017.

On October 15th, 2017 PRISONERS UNITED in Glenn Dyer Detention Center will go on a hunger strike in solidarity to bring to light demands which mirror our own.

We are calling for the support from families and the community to contact the Sheriff Administration and Santa Clara County Board of Supervisors to meet our demands: 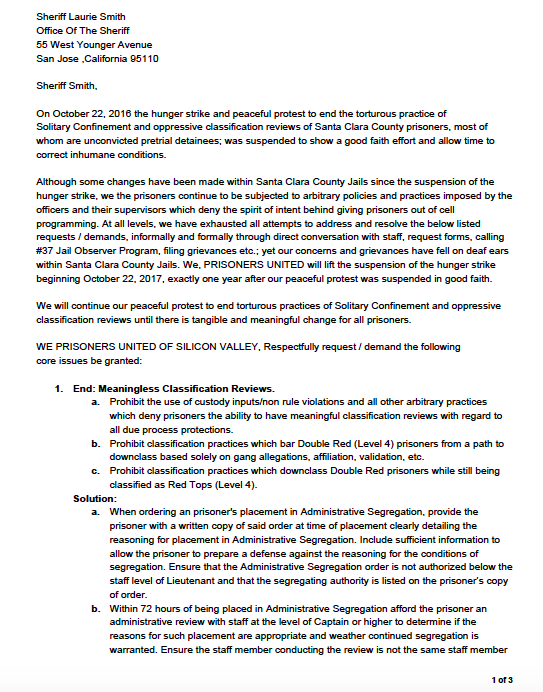 CALL TO ACTION FOR FAMILIES AND THE COMMUNITY:

Prisoners United is a self organized group of incarcerated individuals inside Santa Clara County Jails.