One year after the City of San José entered into exclusive negotiation agreements with Google for a new campus in downtown San José, a Bay Area wide supported effort organized by Serve the People San Jose led a two day march from East San José to Google to deliver the message to halt negotiations.

On the one year anniversary of the city of San José entering into exclusive negotiation agreements with Google for a 20,000 employee campus in downtown, residents of San José who have been excluded from any decision making over having a Google campus on public land marched to Google to deliver a message to CEO Sundar Pichai that Google is not wanted in San José and to halt all negotiations for a San Jose Google project. Dozens of San José community members gathered in East San José on the morning of Memorial Day to send off the contingent of residents from all over the Bay protecting their communities and standing against continued techsploitation.

From San José to San Francisco, Oakland, East Palo Alto, Santa Cruz, Sunnyvale, Mountain View to Berlin people joined in solidarity against the disruption tech companies have created for thousands with zero accountability. A responsibility they are allowed by the myth of tech being a positive and progressive force delivering us to a better future. That future, that only allows a few to live a life of luxury and excess while thousands sleep on the streets and lack basic human rights at Google's doorstep is not one we can continue to validate.Protesters arrived at the Googleplex Tuesday afternoon to demand negotiations with the city of San José end by the next shareholders meeting, and delivered the below letter.

We are Serve the People and we are here to demand that the proposed Google project be halted immediately, and that the 16 parcels of public land be used for public use here in San Jose. We made this trek from East San Jose to Google to deliver our message personally that our city is not for sale.

Almost a year ago your company entered into exclusive negotiations with the City of San José over 16 parcels of public land. You all applauded each other, agreeing that commercial and tech development are the great answer to the poverty and disinvestment here in San Jose. Yet you purposely excluded the very residents who live in the communities you love to just ‘disrupt.’

Whether you feel responsible or not, this is how you are impacting the communities across the Bay Area to Berlin, Germany. Tech and commercial development is not the answer we need here in San Jose. The proposed Google project will only cause more displacement since it would ONLY allow hotels, retail, and office space once you change the zoning; instead of the affordable housing, emergency shelters, and public schools we desperately need.

From the start your proposed Google project has undermined democracy in our city. For example, our Mayor and councilmembers signed Non-Disclosure Agreements on your company Google’s request before even bringing the item to the public. Almost a year later, you and the Mayor have continued to lie and fail to engage to the community of San José. It is clear to us you neither care nor intent to respect our city. We have built this city, it is our choice what we do with public land.

So today we come to make it clear that GOOGLE IS NOT WELCOME IN SAN JOSE!

We are stepping up to you and demanding you:

Please feel free to contact us if you have any questions, but please know there will be no compromise on our behalf. 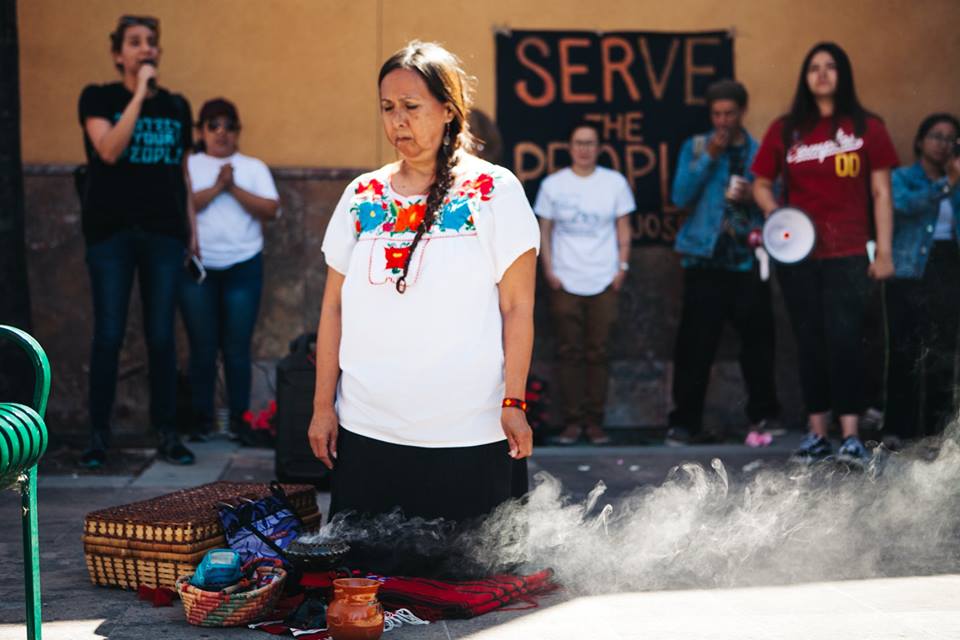 Doña Pati opens with a blessing, recognizing the land and the original Muwekma Tribe of the Ohlone people whose land we are still on. 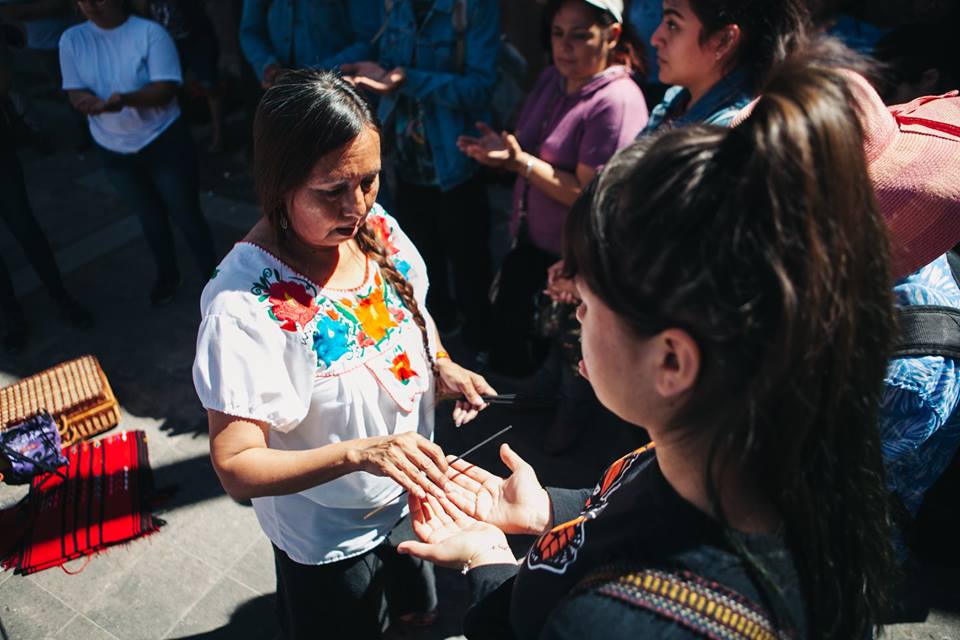 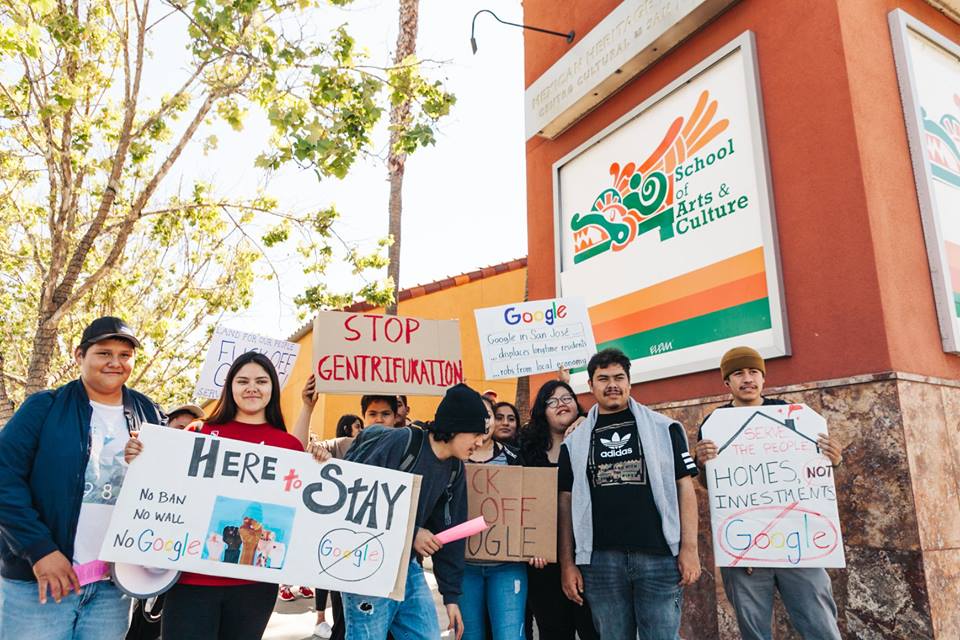 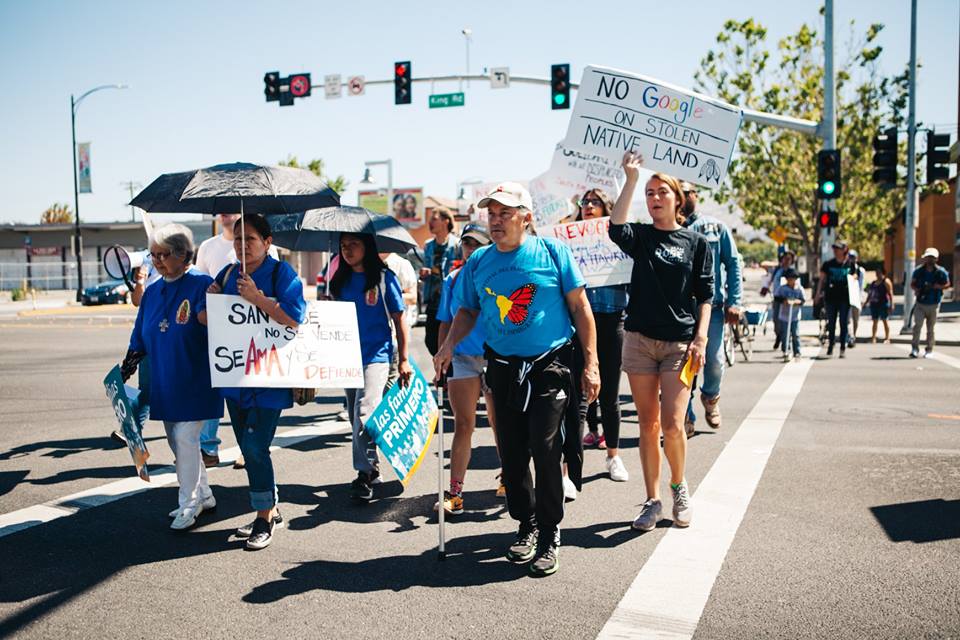 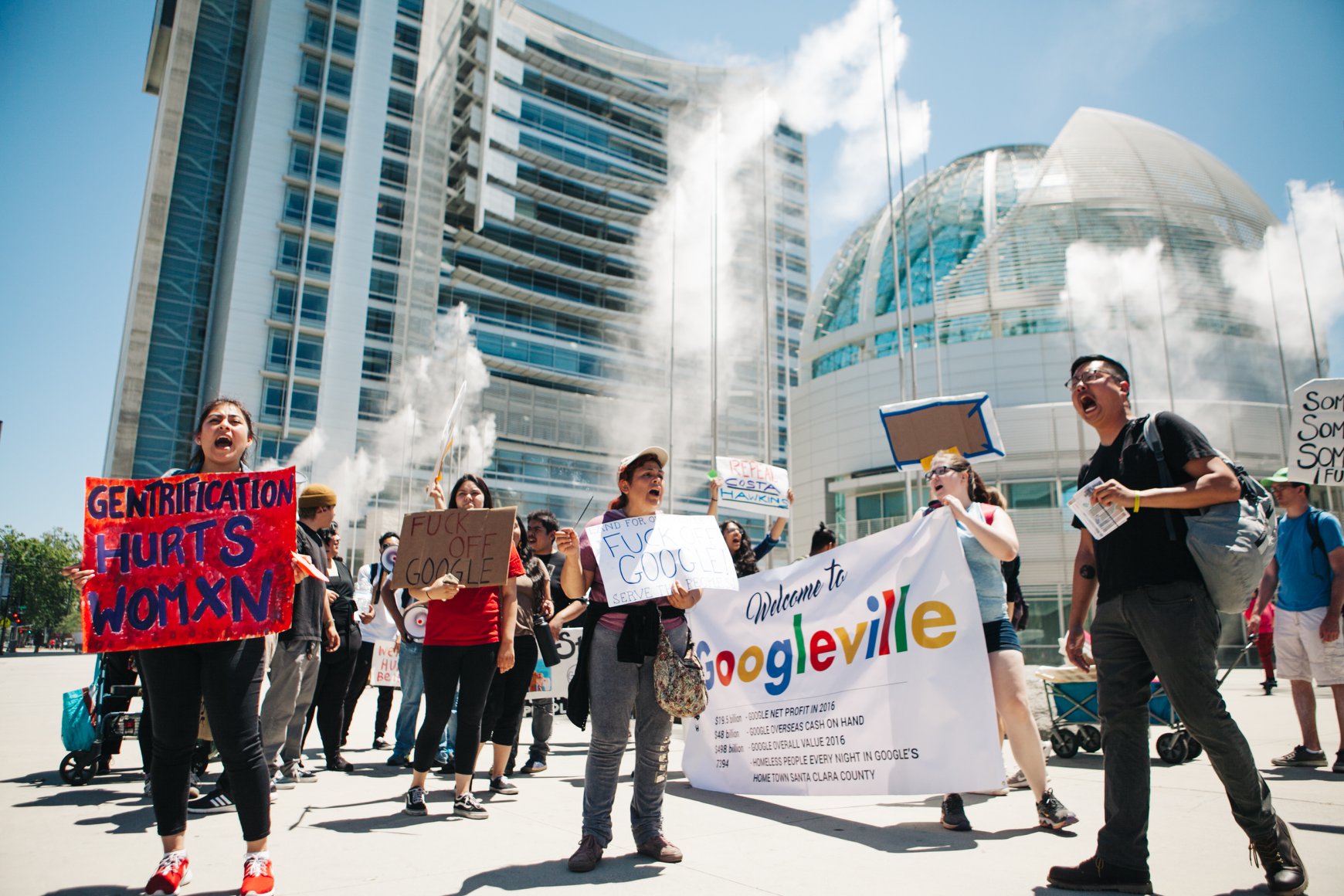 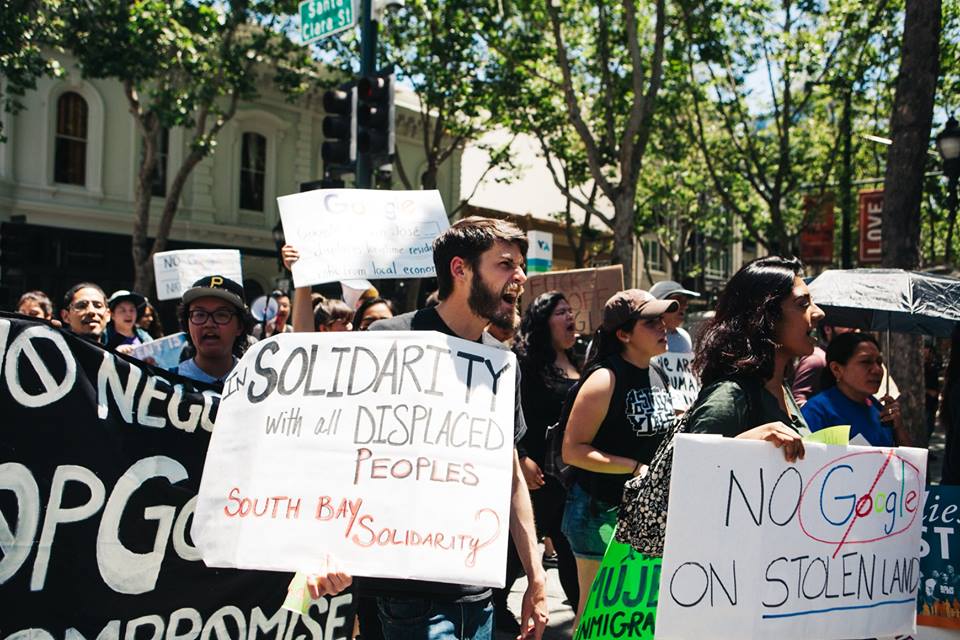 Solidarity with all Displaced Peoples 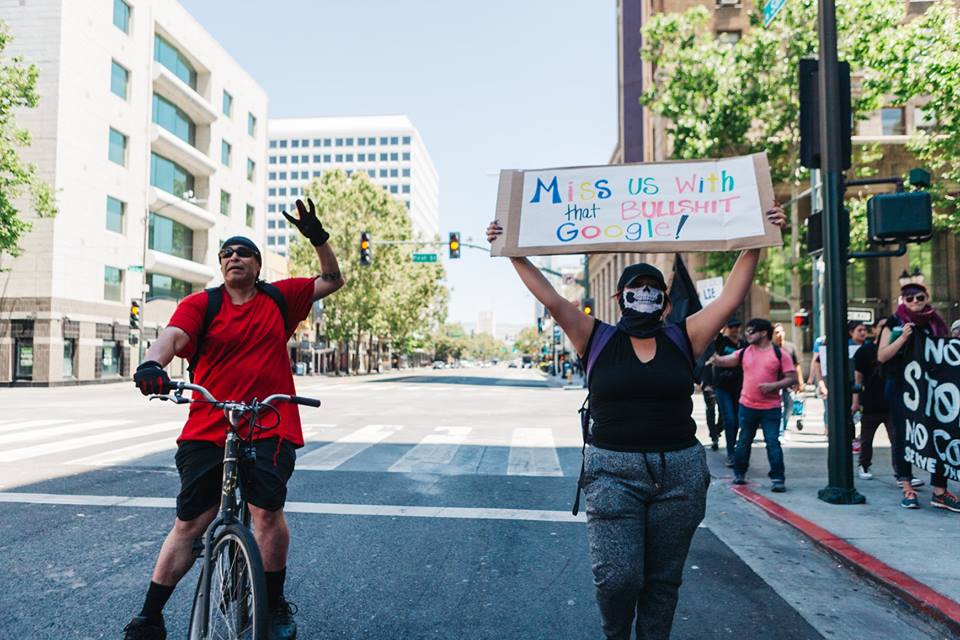 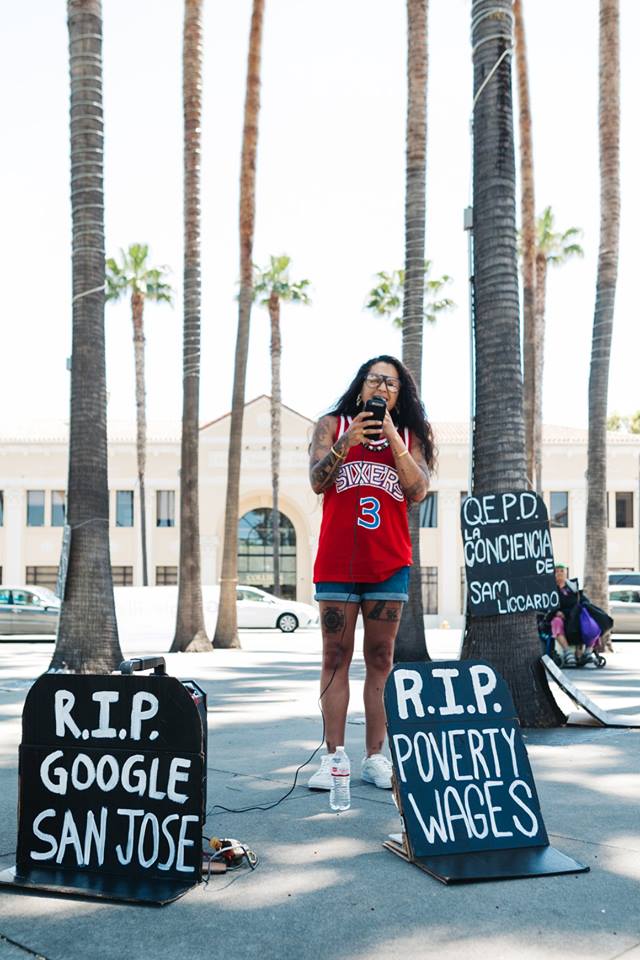 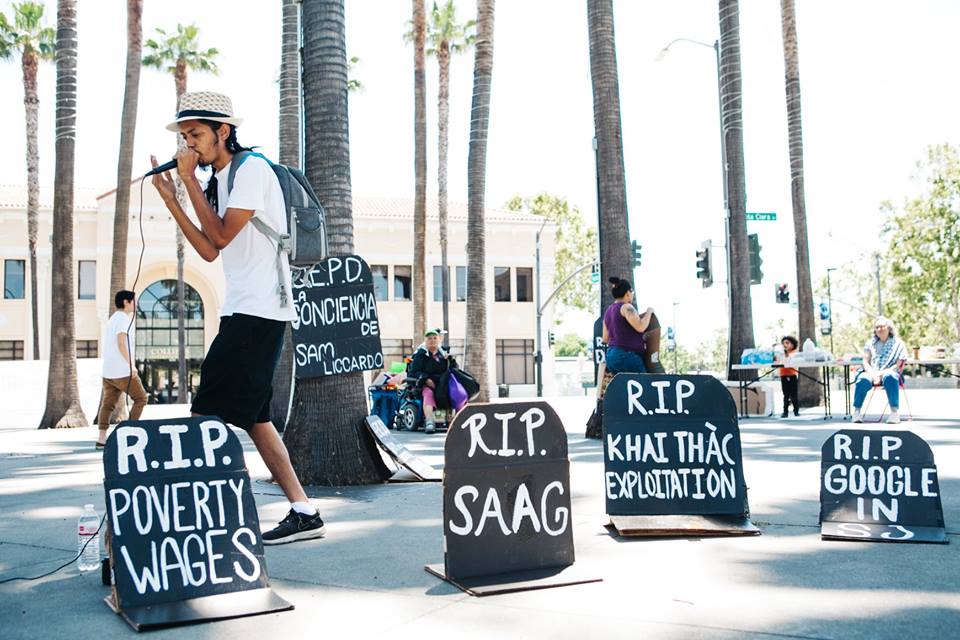 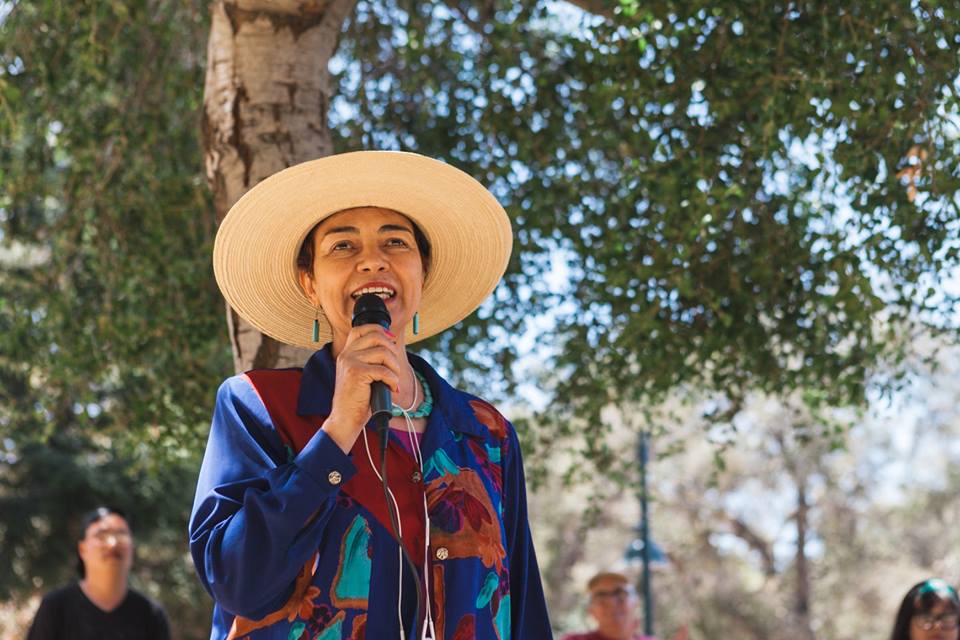 Maria Marroquin of the Mt. View Tenants Coalition speak of the courage it takes to defy Google. 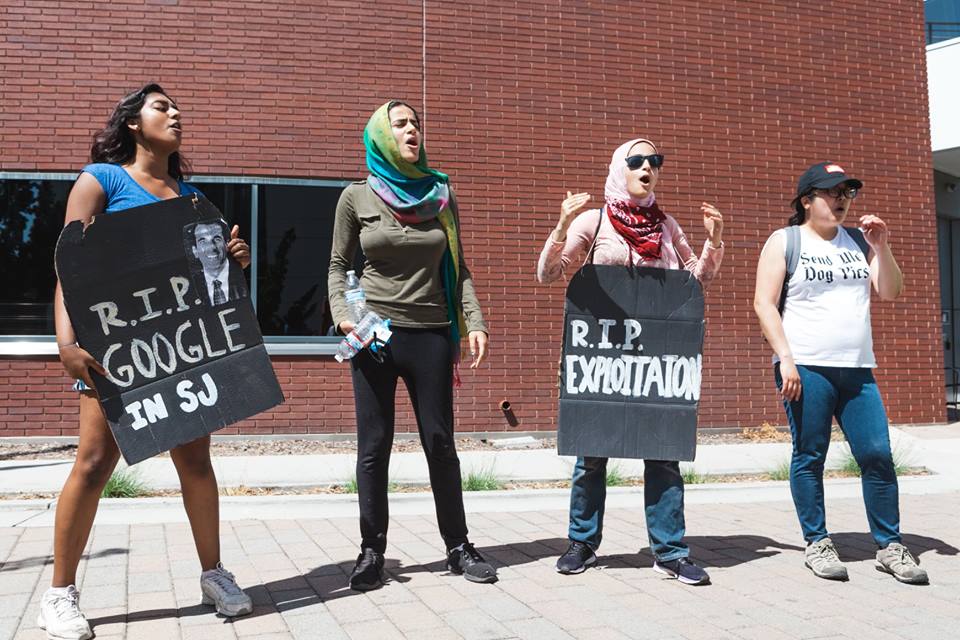 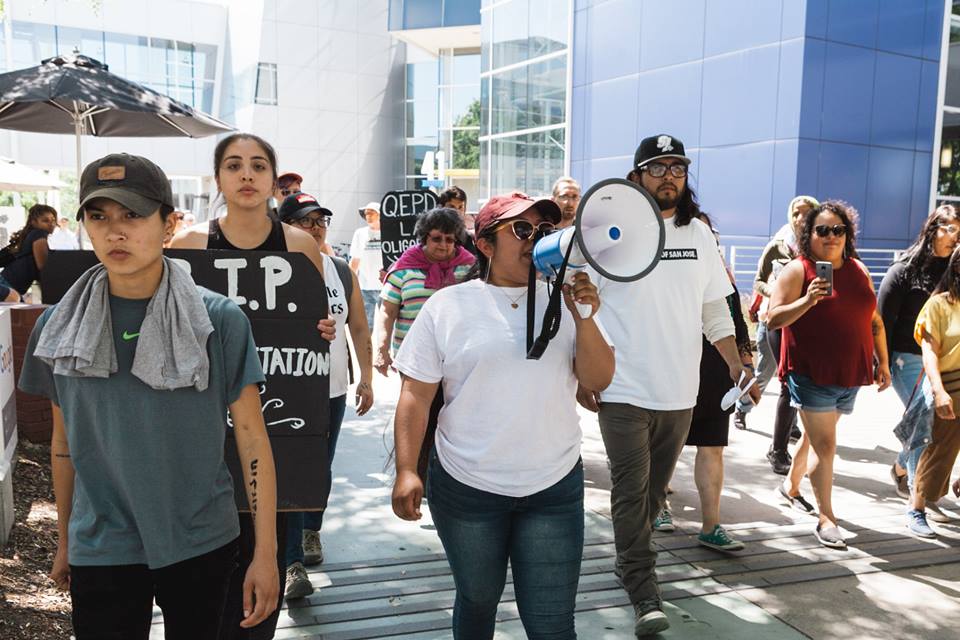 Strolling thru the Googleplex chanting, "We won't be displaced, won't be erased!" 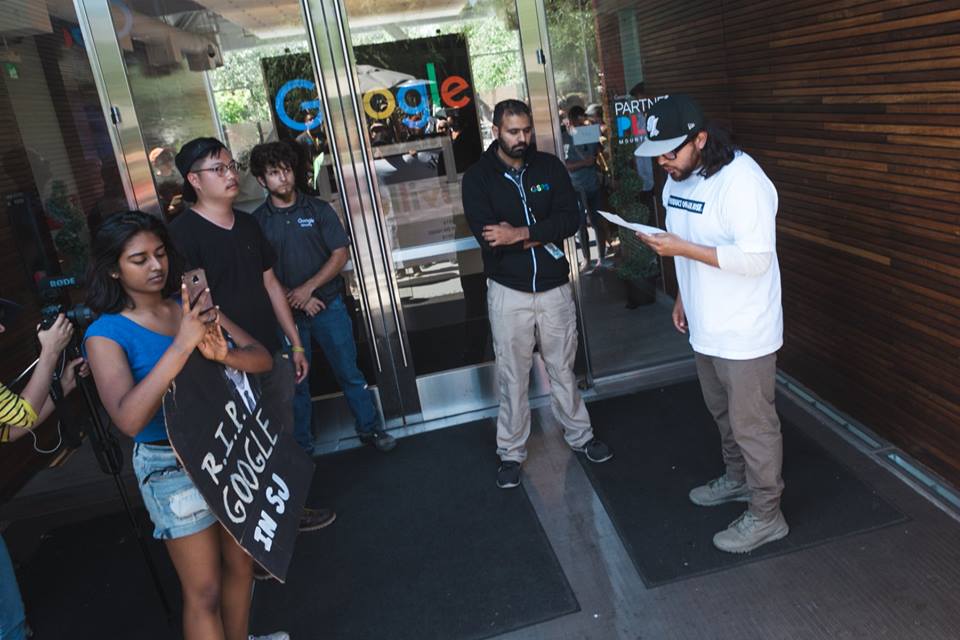 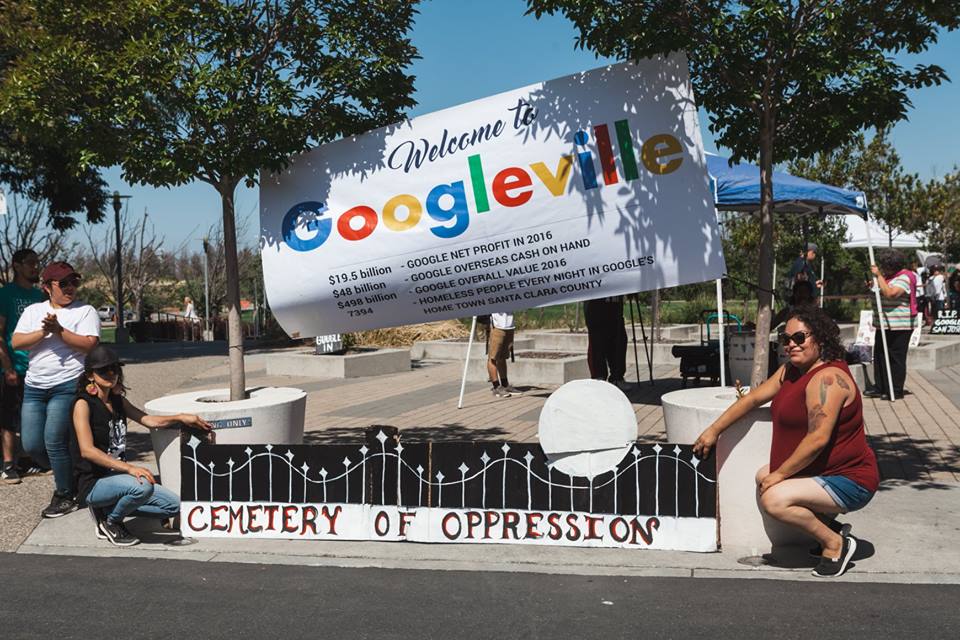 The Cemetery of Opression in front row view from the Googleplex.

Photographs by Xanh Tran of Serve the People San José

Written by
Serve the People SJ