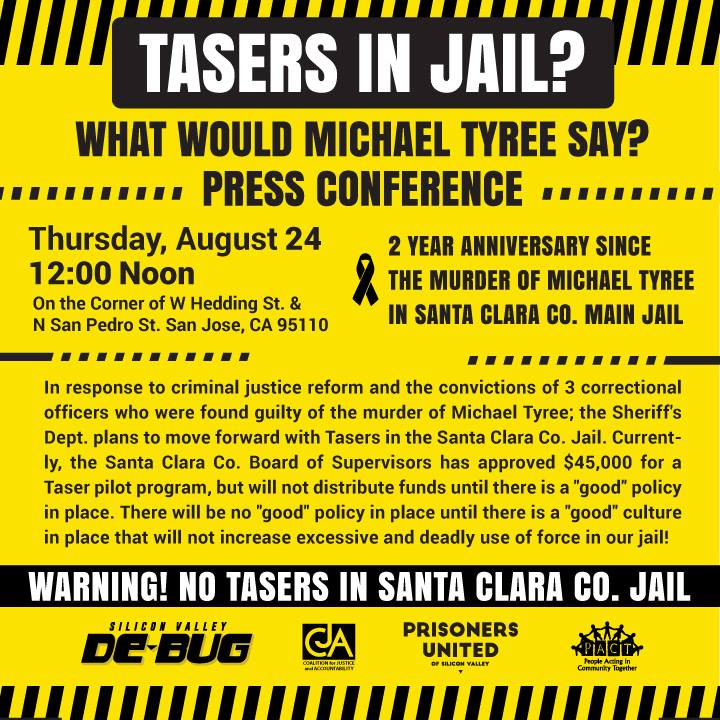 Tasers in Jail?
What Would Michael Tyree Say?

In response to criminal justice reform and the convictions of three correctional officers who were found guilty of the murder of Michael Tyree, the Sheriff's Department plans to move forward with a plan to introduce Tasers into Santa Clara County Jails. Currently, the Santa Clara Co. Board of Supervisors has approved $45,000 for a Taser pilot program, but will not distribute funds until there is a "good" policy in place. There will be no "good" policy in place until there is a "good" culture in place that will not increase excessive and deadly use of force in our jails!

Although safety should be prioritized, before the Santa Clara County Board of Supervisors considers any Taser policies, the Board should consider other alternatives. For example, hiring more jail staff, increasing pay to accommodate cost of living, 21st century policing, finalizing jail oversight, body worn cameras that are used for their original intent, and above all continue the great relationship we have gained between the administration, detainees, their families and various organizations in support. Supporting the efforts of criminal justice reform including increasing rehabilitation and educational programs to all security level detainees may also prove significant. Considering the convictions of three correctional officers for murder with their bare hands without the use of Tasers, it is not the time to bring Tasers into our jails adding another tool for excessive and deadly force.

According to data brought forth by the Sheriff's Department, we have one of the lowest number of assaults in any jail population. For the past 5 years, Santa Clara County has had a 35,000 base population and only 150 to 200 assaults per year. This makes our Santa Clara County jail population one of the safest in the country. Although no number of assaults is safe, this only proves there is no reason for Tasers in our jails!

"Tasers are NOT an alternative to deadly force... Tasers can cause serious injury or death" -Taser International

In-custody deaths skyrocketed by 500% in the first year after the devices were introduced. -University of California, San Francisco