A commentary on the subtext of racism in a white ally's ability to pick and choose when they center people of color issues.

Creating a switch that allows you to care and not care depending on the social implications is a tool allotted to white folks in droves. Faux nihilism  —  the privilege to be abstract and cynical in the face of struggle  —  is the switchboard. Black and brown folks are taught that our struggles are second tier and our bodies devalued. We can’t pretend and accept that nothing’s real or that things are meaningless. This faux nihilism defends and keeps in place all the structures that it supposedly does not attach weight to. For the black and brown people who are in constant struggle with access and permission our whole lives, finding emotional and monetary support through whatever resources we have available and placing meaning to our lives and communities is a big deal.

The white faux nihilist comes in the form of an “ally” who is consistently speaking up about issues affecting black and brown people. How they find it important to center p.o.c. problems around their white lens of the world, is foreign to me. The power they receive from consistently picking and choosing sides depending on who they think is listening is regressive. We are not post racial, an agreeing brown friend does not give you the go ahead to disregard your privilege. I think any person of color has the right to individualize their reaction to any given situation, but if a white person looks to them for validation I find it problematic. But that’s something for us to work through on our own; I know the effects of internalized racism very well. 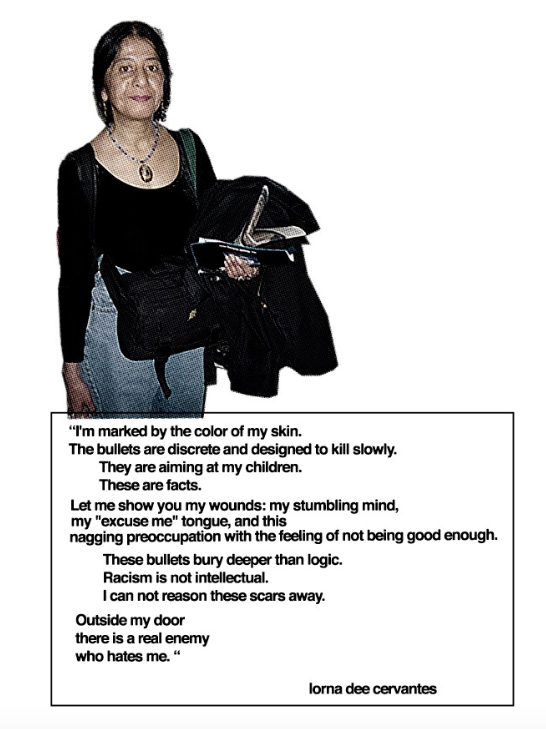 I believe some white folks are mistaking privilege for nihilism. They consistently re-center themselves in social aggregation as an “outsider,” but gain ground for their agendas by adversely promoting their opinions to brown folks, creating friction in spaces they inhabit. Recently a friend commented that silencing p.o.c. with divisive rhetoric and centering your lens of whiteness is worse than children of immigrants speaking out about SXSW and still playing. This was in response to a recent situation where a group of artists and musicians were fighting to remove a controversial immigration clause that threatened to involve American immigration authorities if an artist broke the rules at SXSW. White people who loftily set themselves apart from other whites by acting so aggressively not racist increases white solidarity. We must remember that racism isn’t always conscious dislike.

"An 'ally’s' conditions of life differ from black and brown folks and often lend the time to be profound, willfully apolitical, transcendental, and abstract."

Privilege is the pre-existing condition for this faux nihilism. I say this in a way that sounds wildly out of pocket, I’m sure. But I assure you I am not trying to front in a way that I think these folks are mad evil, it’s just a visible trend of carelessness under the guise of politicking. An “ally’s” conditions of life differ from black and brown folks and often lend the time to be profound, willfully apolitical, transcendental, and abstract. They know that race is how economic class is lived in America, but they casually omit this in their thought processes when they “check their privilege” by validating their opinions so recklessly. Asking questions about a larger picture is a self indulgence black and brown folks don’t often process long if at all. We hustle in ways that place us in vulnerable positions, while also carving space for others. When urgent moralities are enforced upon us know not all of us are under the same understanding that we owe anything to some communities that will use us as tokens for their own agendas; I see this as a divisive tool.

The struggle is living and coping with generational trauma, we don’t always incorporate the principles or integrities of others with our minimal options to support ourselves. The intertwining of Capitalism and Racism in America isn’t ours to fix.

It’s easy to give up things you have access to, things you can take or leave. Black and brown folks are still fighting to have the choice, to have access, to have options. If you think you’ve heard this a lot, you haven’t heard it enough. It’s hard to be brave, the idea of being brave is something I only find when I feel cornered. It isn’t a skill I was taught to whet through growing in this world. Trauma reaches us all, but on top of trauma we are more susceptible to state violence and we navigate our world by the levels of violence that surround us. My experience has taught me that my voice is something to be used only after I have fought deflection. The careless white “defender” is safeguarded before any critiques of their statements. The person of color is criticized first and we have to defend our list of transgressions applicable to a situation or not. I have watched “prison abolitionists” time and time again enroll the exact ideals they claim abhorrence to. Our lives are politicized from birth – benefit of the doubt does not exist for us.

White fragility is, at its annoyingly accepted core, some fight or flight response bullshit from white people who want to have confidence in the belief that themselves, their actions and the whole world is less racially divisive than they are/it really is. It shouldn’t be our job  —  but it often is  —  to check the ego, which is a risk to our own wellbeing. Questioning the intentions of a well-spoken white person should not be such a risk. White folks will place their problems before black and brown people, they were taught this. It is time for us to stop engaging with white people when it comes to racism and its effects on us. We get nowhere combating white fragility, it works in a way that it cracks down on the person giving critique and essentially intimidates them into the silence we so often live in. The indictments on a person of color for ‘pulling the race card’ on a white person is exponentially condemning.

"I want our past and future to be lead by us."

When telling brown folks how to support brown folks, the term stay in your lane comes to mind. Adding to the conversation is fine but leading conversations about racism to brown folks should be redirected to your white brethren. If you think we need help with recording ourselves, you are racist. I want our past and future to be lead by us. Don’t for one second believe that my beautiful skin and upbringing have taught me that I am required to be here for you or to try to make you feel the slightest bit better about all this bullshit you are cornering me with. If you think that I am here as your brown skinned “I’m not a racist” savior, then you are racist. Believe that with or without your critique of how we survive, we are still struggling and still handing out halos way before they are to be dispersed.

Related Media:
Supporting Each Other in a Trump Era
No Need For Permission - Finding Liberation in the Spaces We Create
The Crushing Sense of Nobodiness Part II