In a win that recognizes the stance of counties that clearly separates federal immigration enforcement activities with local law enforcement, Santa Clara and San Francisco counties celebrate US District Judge William Orrick III’s latest ruling that strikes down the third Executive Order by President Trump in 2 months. The Santa Clara County Forum for Immigrants Rights (FIRE) Coalition organized with the Free SF Coalition and SEIU to support – both in the courts and in the streets.

On Tuesday, April 25, 2017, federal Judge William Orrick ruled in our favor of Santa Clara and San Francisco counties’ lawsuit, winning a preliminary injunction against the Executive Order issued by President Trump threatening to withhold federal funds from ‘sanctuary cities’. On all legal causes of action brought on by our County – such as the overreach of the orders and powers of the Presidency – the Judge ruled on our favor. This decision also affects every county and city in the country – not just Santa Clara. In the words of our County Counsel James Williams who led our county in this fight, “This Executive Order is dead.”

As an organization made of individuals and families who have loved ones caught in the crosshairs of the criminal justice and immigration court systems, Silicon Valley De-Bug was proud to file an amicus brief alongside our partners SIREN, Asian Law Alliance, Pangea Legal Services, Community Legal Services in East Palo Alto, and the Stanford Law School’s Immigrants’ Rights Clinic.Our brief highlights the importance of our civil detainer policy that draws a clear line between the federal immigration activities and local law enforcement. Our policy served as a model for the nation. For the 6 years that our policy has been in place, our community has said we will not give in to the false narrative of public safety vs. immigrants rights. Rather, it is through immigrants rights that we can achieve public safety.The Executive Order threatens the very values our county strives to uphold – these values of inclusion, of justice, of fairness, and of keeping families together. And these values aren’t just theoretical ones you pull when you feel sentimental. They are real that play out in everyday decisions and actions – when you’re simply trying to walk your child to school, or decide to go to the hospital when you’re sick, to go to court to handle a case.For our families at De-Bug, encounters with law enforcement can also be a matter of life and death. For immigrants, the threat of potential deportation and separation from families is a factor in deciding whether or not to call, interact, or engage with police. This might mean seeking services, asking for help, visiting a loved one in jail, or supporting them in court.That’s why the policy we’ve held for so long – one that draws that clear separation of ICE and local law enforcement – is so important. As a county, we were one of the first in the nation to draw this bright line. Our policy became a model policy for other counties and states in the nation. Because of this policy, there are parents home to tuck their children in at night. There are children going to college instead of prison, jail, or detention facilities. There are communities on their way to being whole.

It is even more critical that in a county like ours, where this bright line is drawn, that our entire community stands up to protect those most vulnerable. In our weekly meetings with families, in the hundreds of community presentations we've done, the fear is everywhere -- even with our most explicit policies.  During the floods that devastated neighborhoods in San Jose earlier this year, some victims refused to go to emergency rescue shelters because they feared ICE agents coming in to take their families.  Instead, these individuals chose to sleep in their cars. In another situation, we have a community member, a DACA recipient, facing charges in the system.  As her case comes to a close, she is nervous about meeting with her probation officer for fear of being turned into ICE. She is about to have her first child, and the threat of being uprooted and separated from her family is obscuring what really should be a precious time in her life. The fear of deportation still clouds the necessity of accessing services, even in life or death. 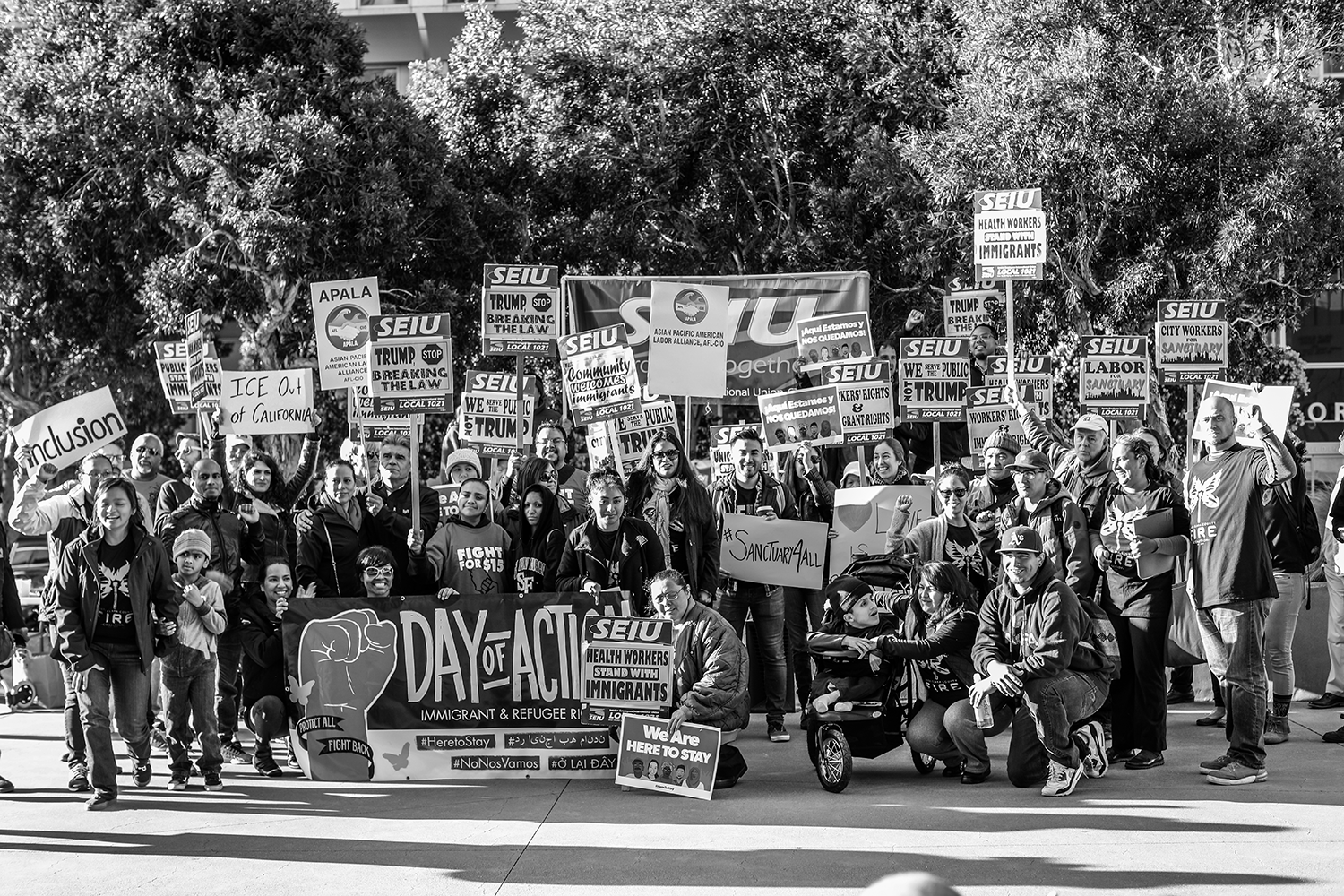 The amicus briefing that was filed in Federal Court. (Click to expand.)

Photos of the community rallying in support of the lawsuit outside the SF Federal Court house the day of the Amicus Brief was being heard this month. (photos by Melesaine) 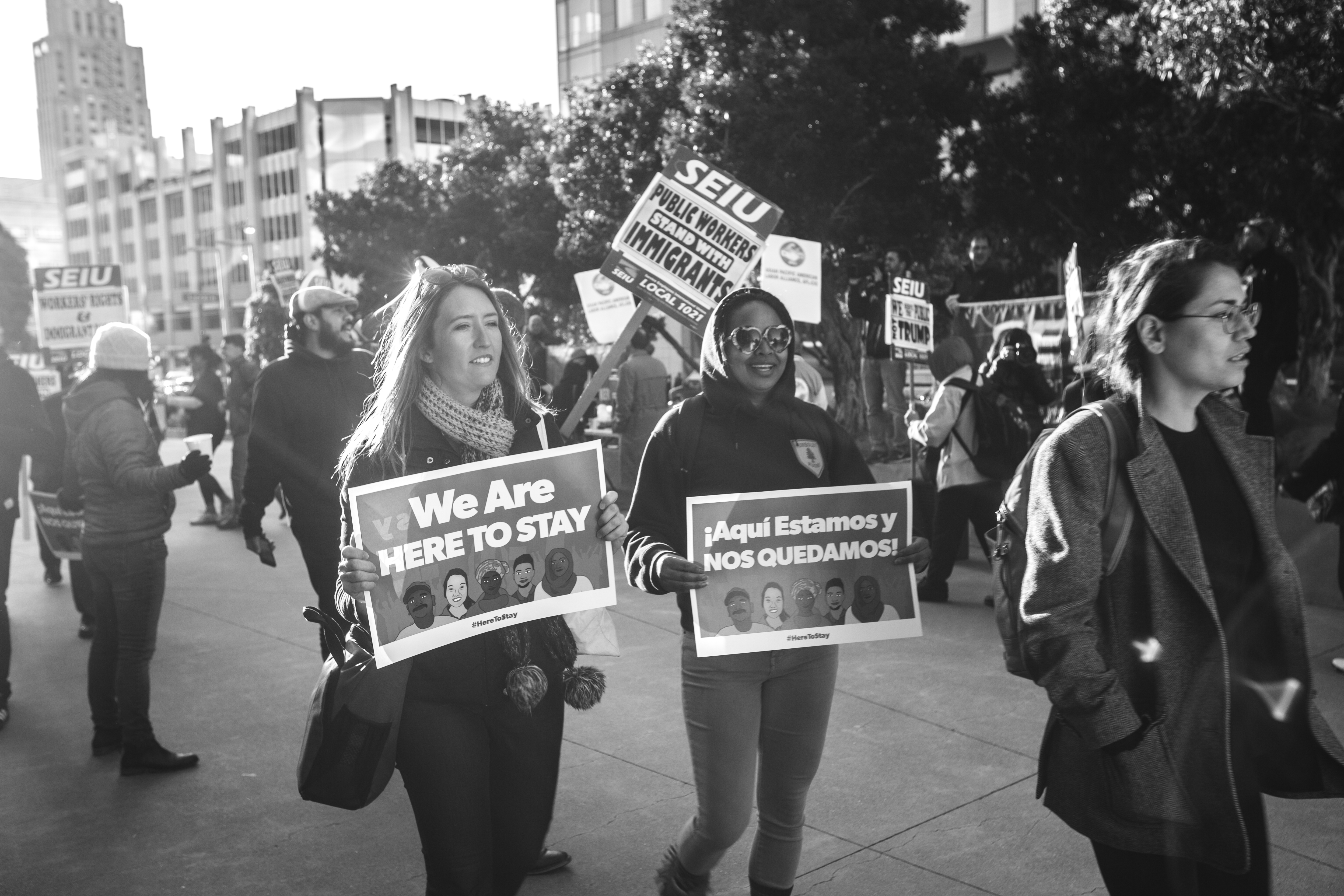 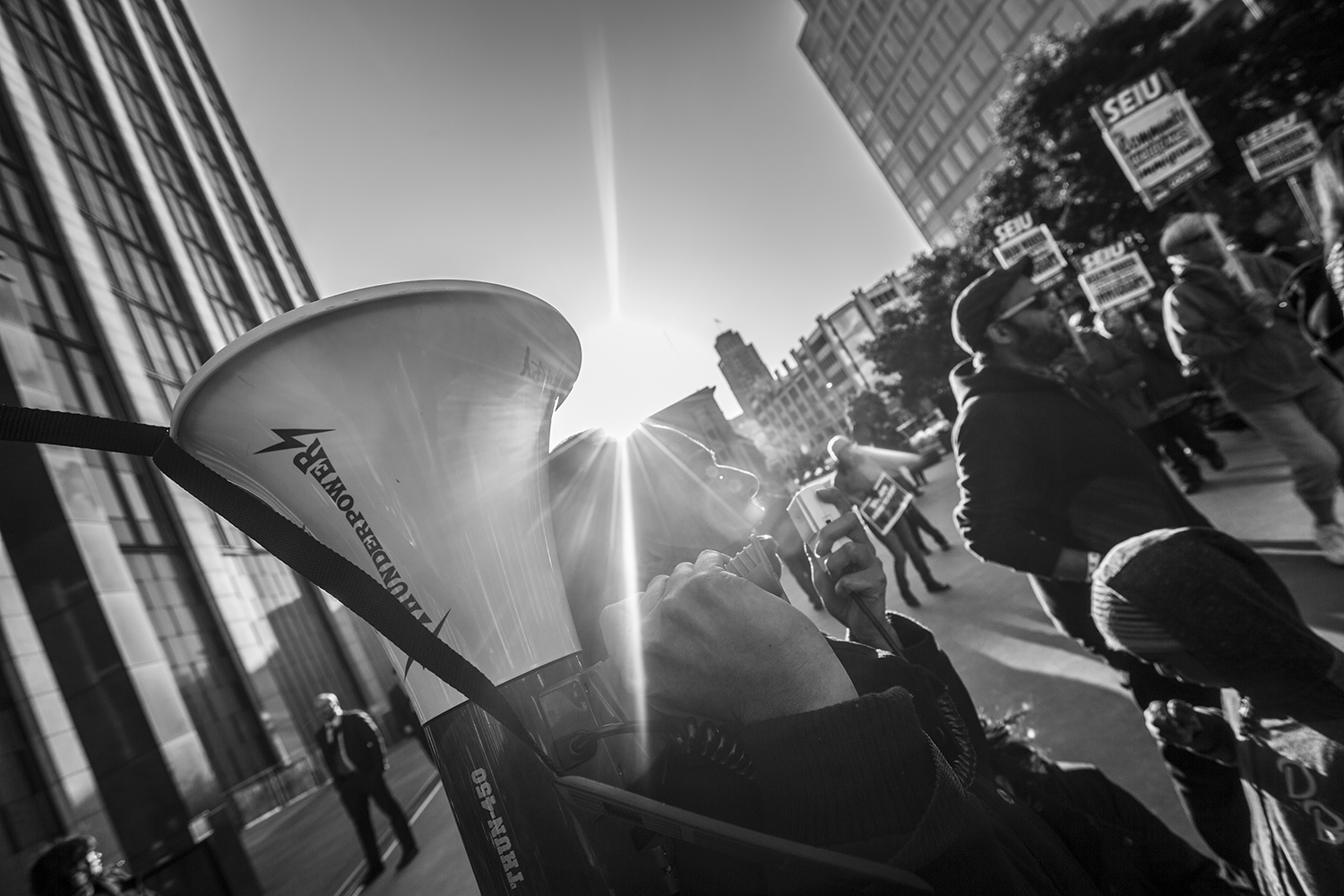 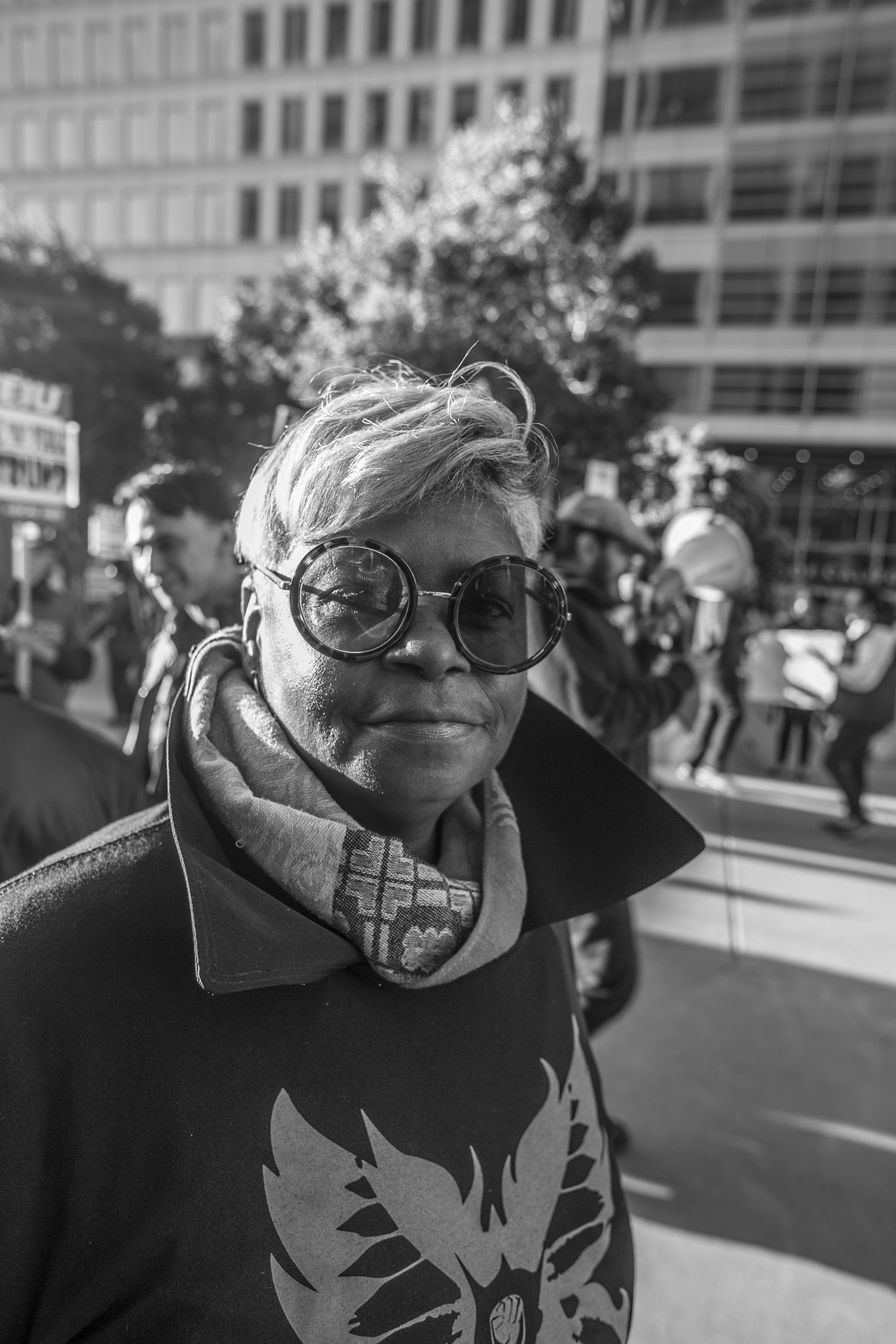 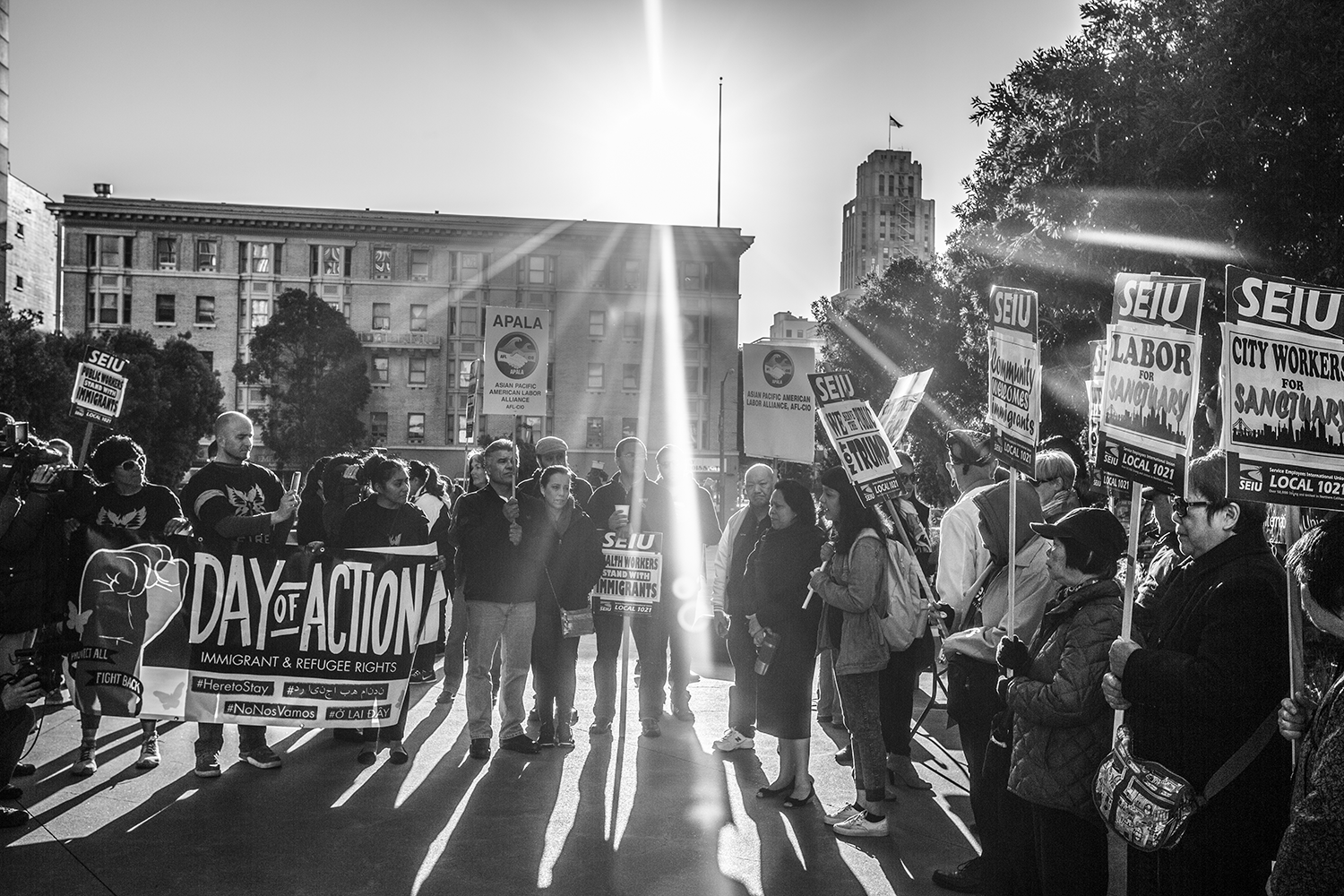 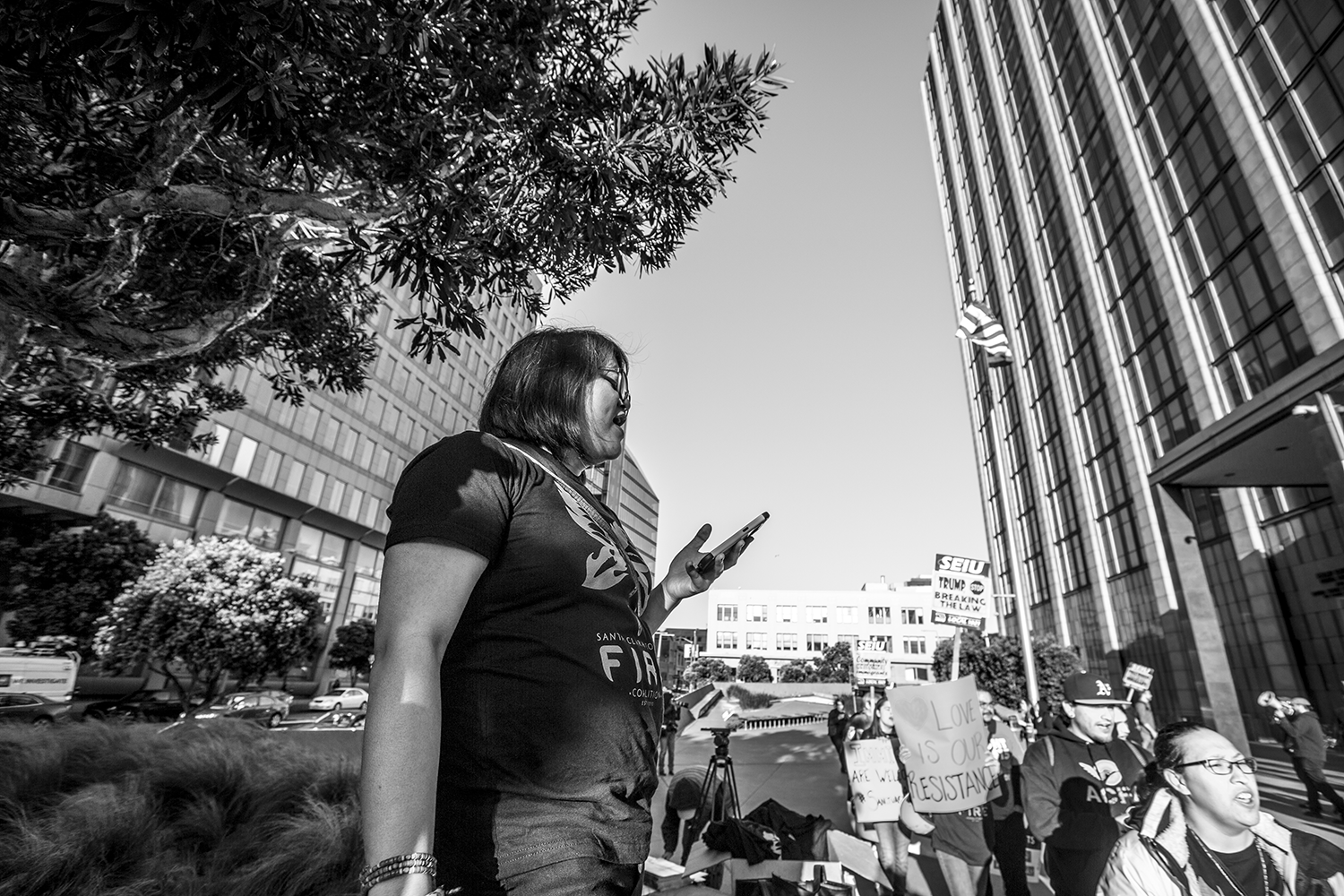 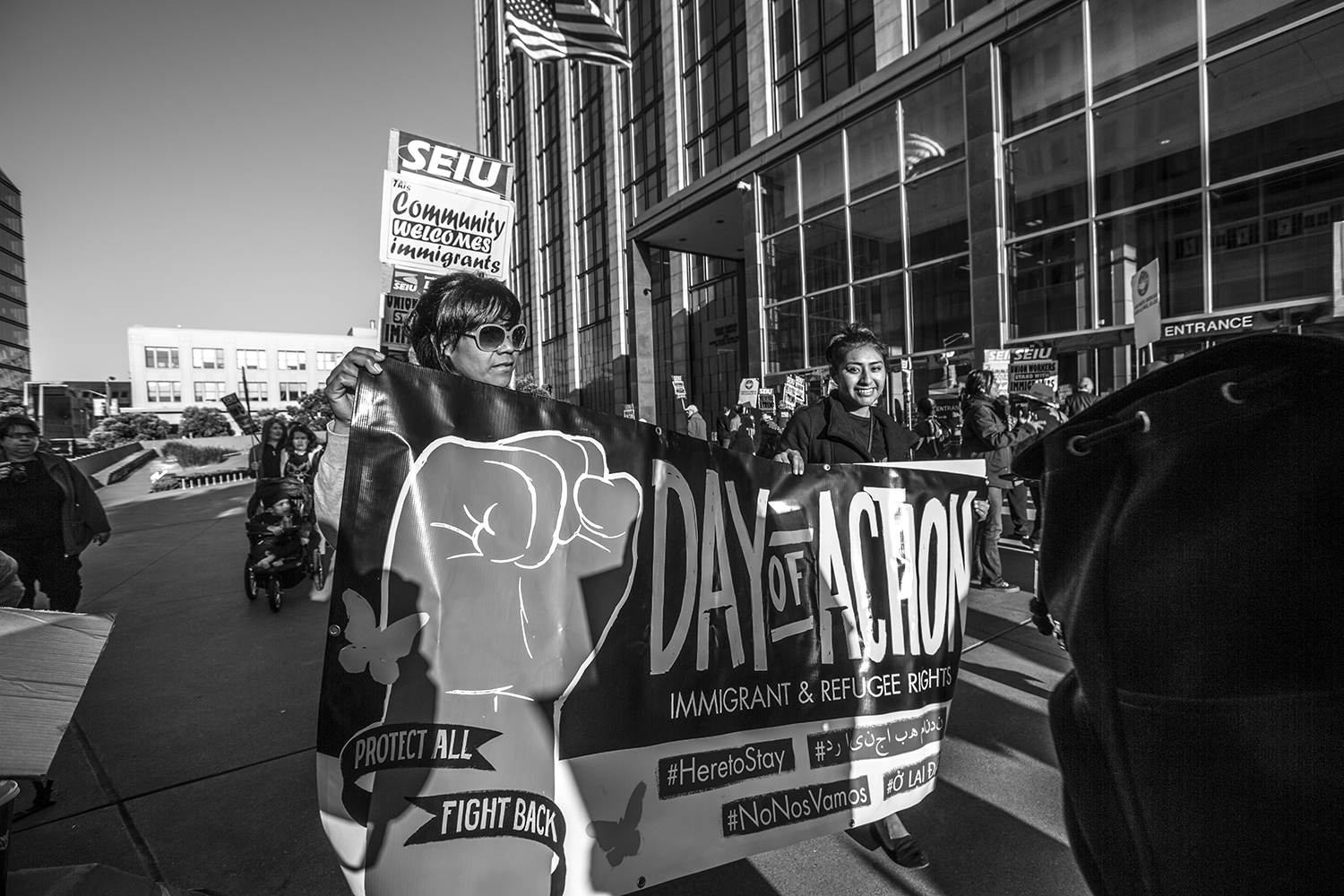 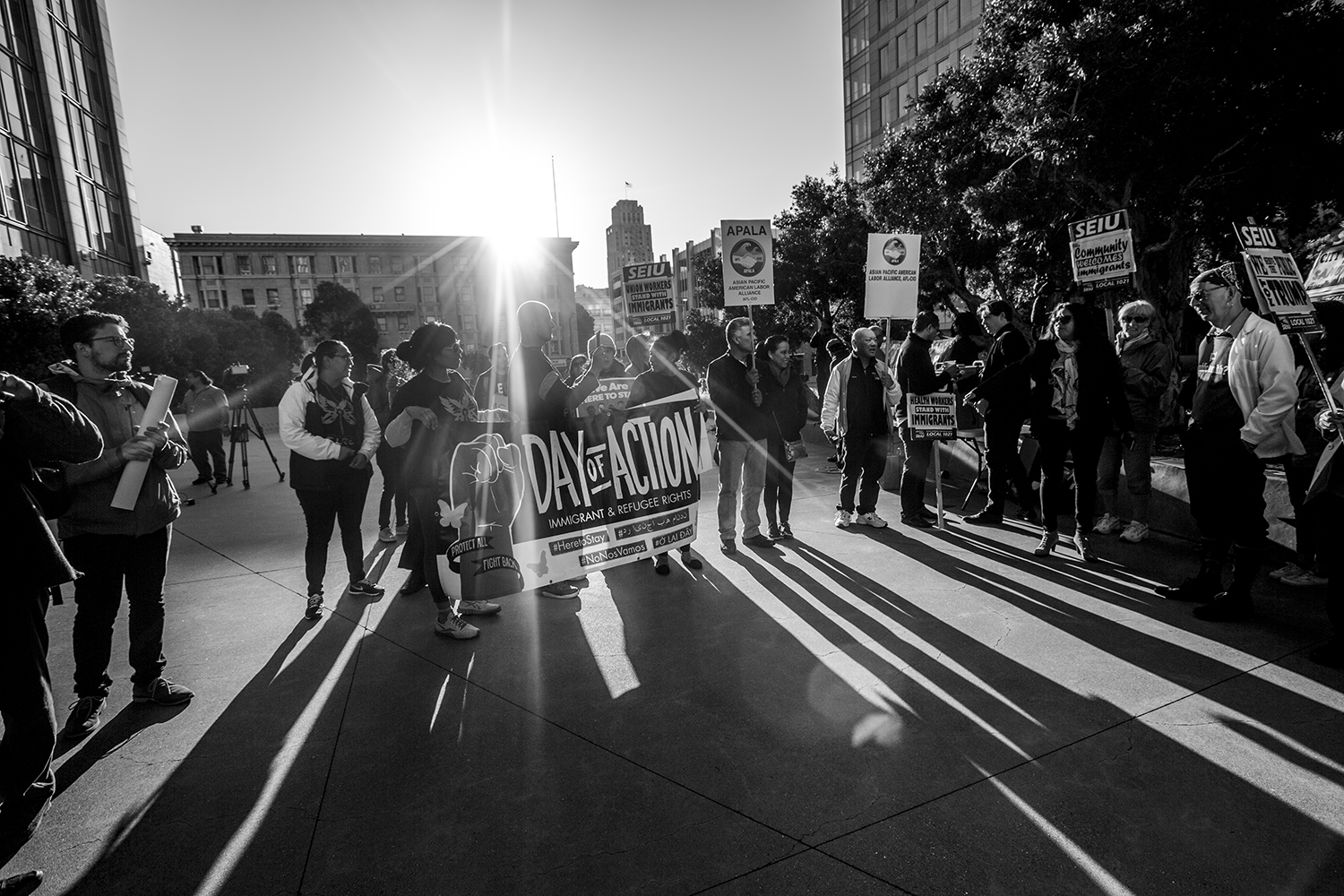 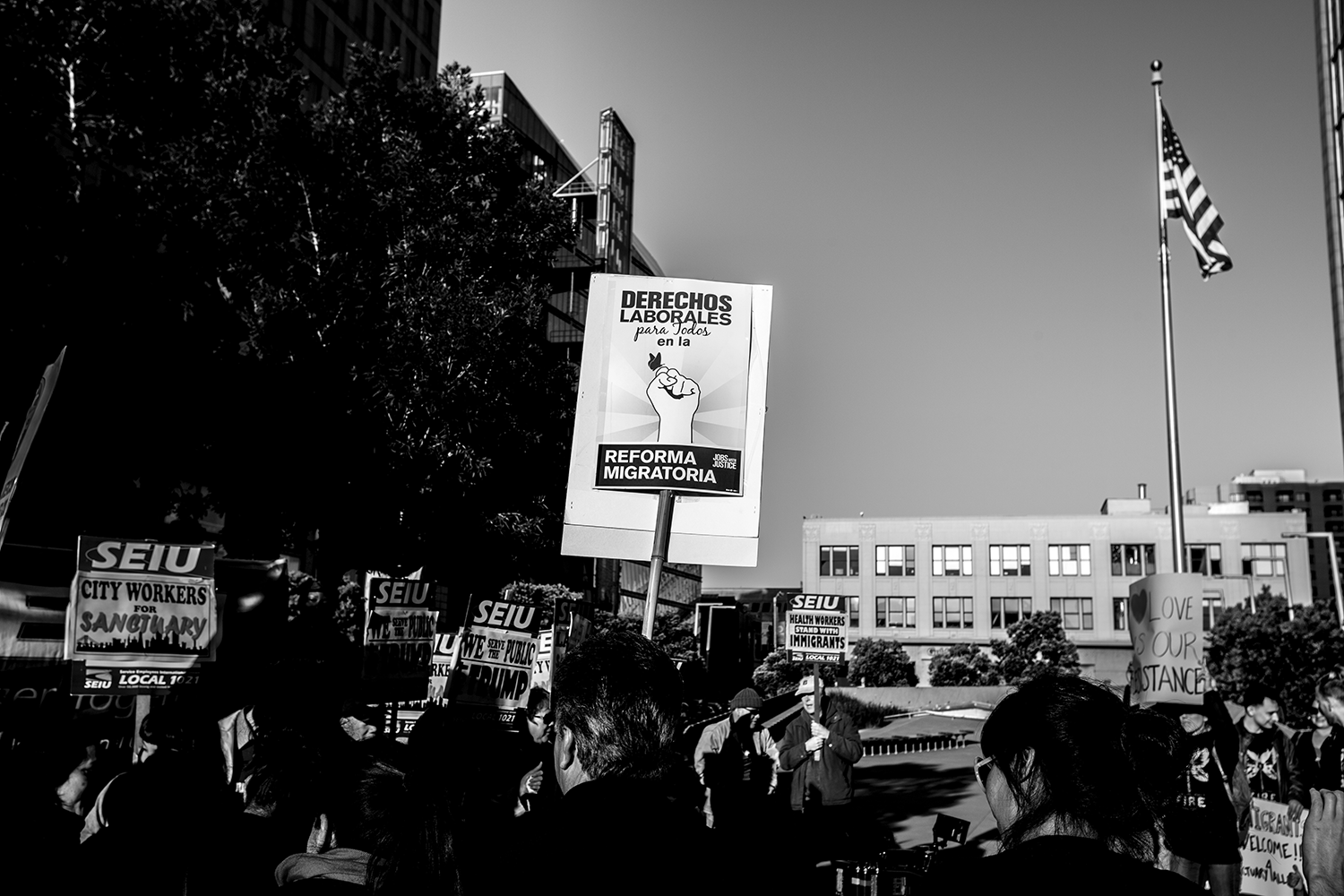 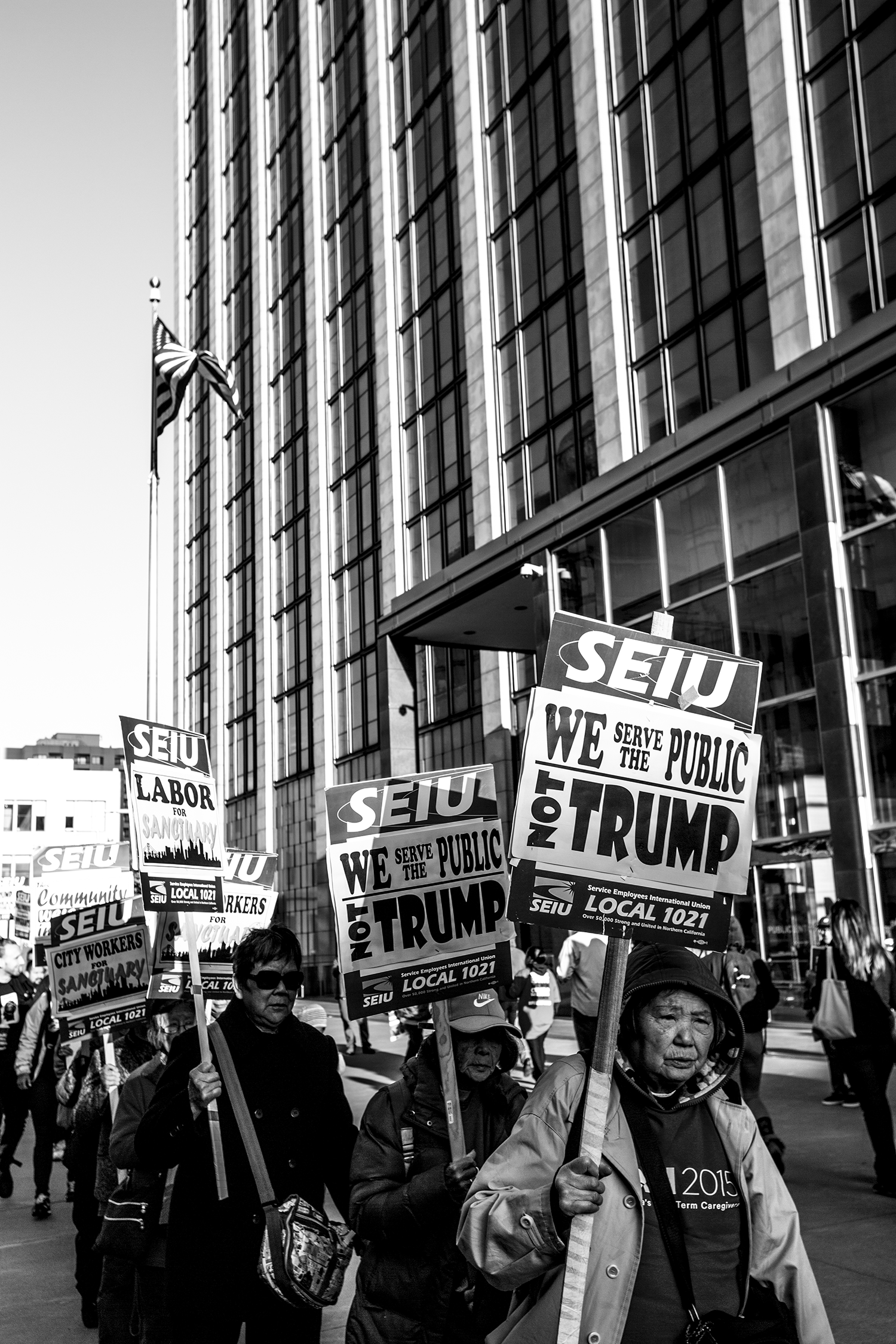 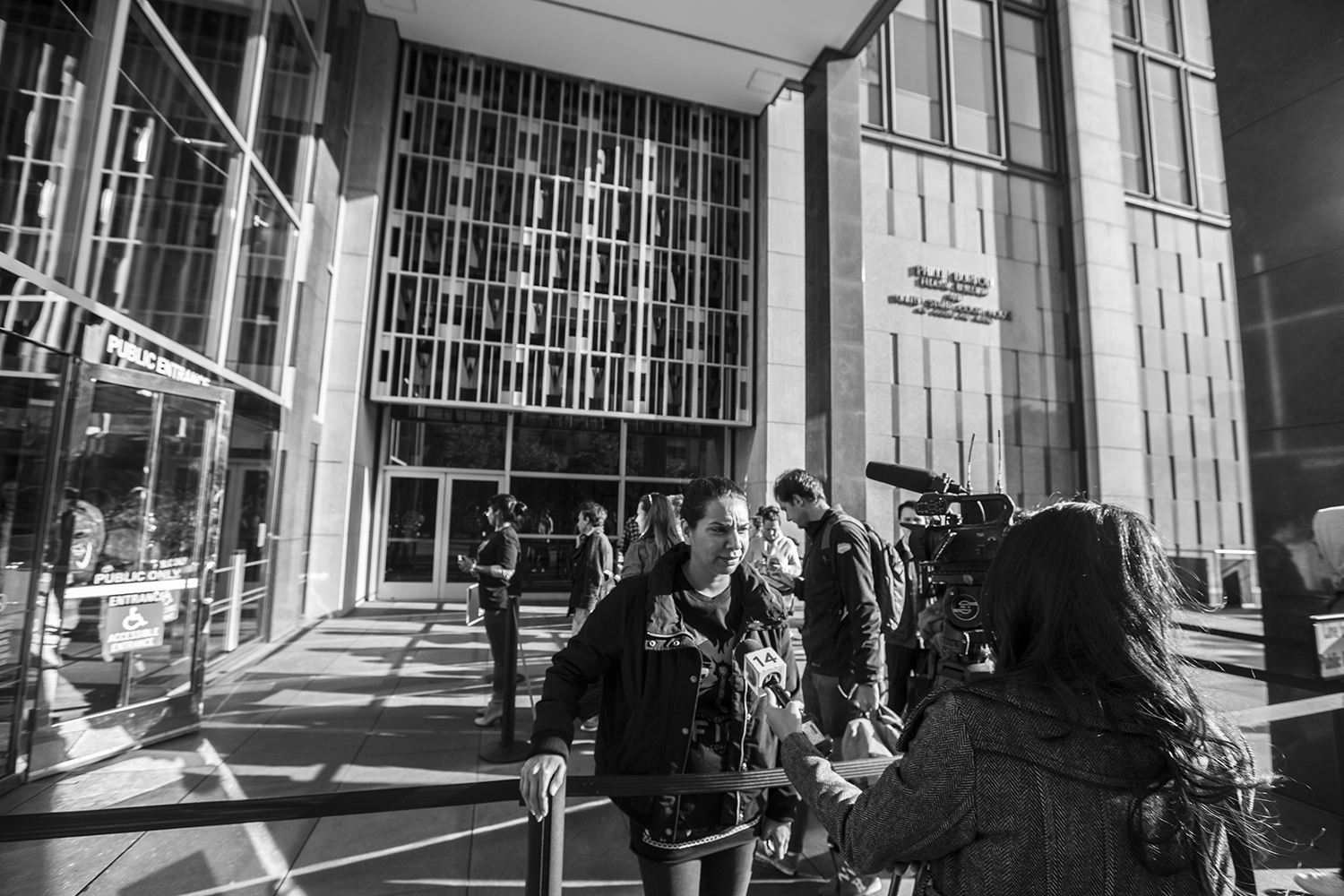 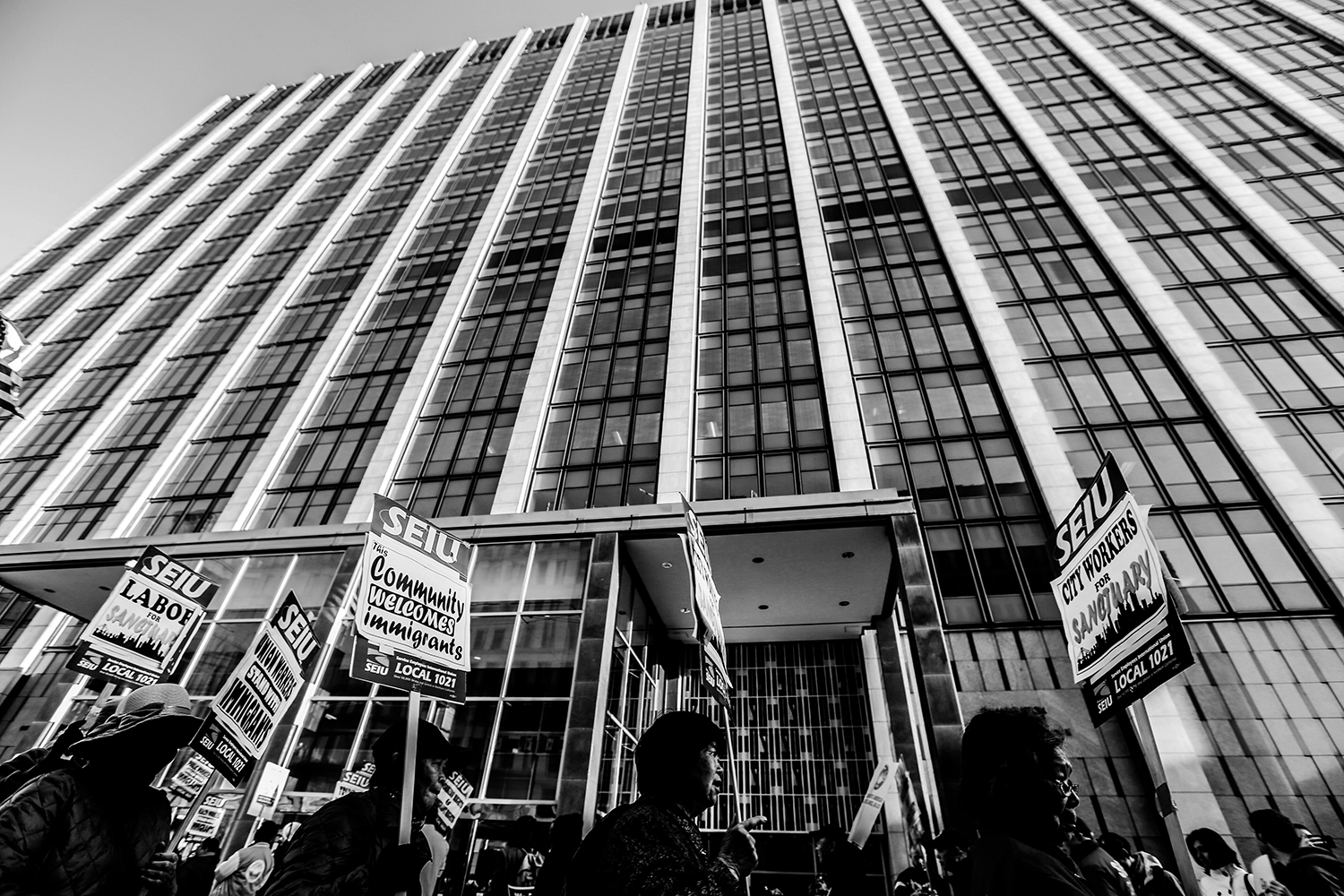